Biosecurity: Protecting our State and Country 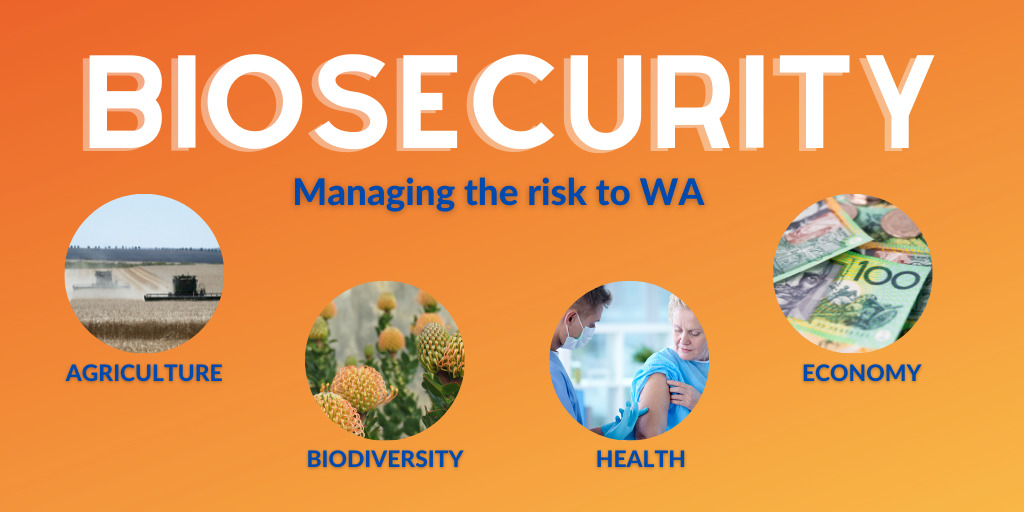 As defined by the Department of Primary Industries and Regional Development (DPIRD), biosecurity is the management of the risk of animal and plant pests and diseases entering, emerging, establishing or spreading to protect our economy, environment, and the community (2021).

In Western Australia (WA), biosecurity is fundamental for safeguarding our natural environmental and agricultural resources against threats such as pests, weeds, and diseases. WA has a known reputation for safe, high-quality agricultural products, of which 80% is exported to international markets (Government of Western Australia, 2016). This is made possible by Australia’s geographical isolation and biosecurity systems, meaning that WA is free from many pests, diseases, and weeds present in other parts of the world.

Prevention of environmental disease and pathogens

Biosecurity is more than just protecting the health of our plants, animals and ourselves. An outbreak of pests, weeds and diseases also have the potential to negatively affect WA’s economy, our biodiversity, agriculture, human health and social amenities (Government of Western Australia, 2016). In Western Australia, it is regulated through the Agriculture and Food division of DPIRD under the Biosecurity and Agriculture Management Act 2007 and Biosecurity and Agriculture Management Regulations 2013 (DPIRD, 2020). Nationally biosecurity is regulated by the Department of Agriculture, Water and the Environment (DAWE) under the Biosecurity Act 2015.

DPIRD (2020) implements its biosecurity measures through:

Between 1985 and 2005, two diseases commonly known as BSE mad cow disease (BSE) and foot and mouth disease (FMD) caused havoc. BSE infected approximately 200k cattle and led to the pre-emptive destruction of 4.5 million more in the United Kingdom (UK). The FMD epidemic in the UK in 2001 led to eradicating 4 million livestock (Davis, 2002), leading to health, ethic and economic issues. WA’s Biosecurity measures help stop diseases like these from entering our State.

As well as the internationally known biosecurity risks, WA has many lesser-known biosecurity risks that require interstate and intra-state biosecurity measures (DBCA, 2014). For examples in 2019, six nests of imported red fire ants were identified and eradicated at the Fremantle Port by the DPIRD (O’Flaherty, 2019). Since then, DPIRD has conducted three surveillance rounds within a 500m radius of the original nests with no other cases. After six rounds of surveillance with no positive detections, WA will be declared free of invasive species (DPIRD, 2020b).

Biosecurity breaches are not always easy to detect, as a results to prevent their introduction into WA, you cannot bring fruit, vegetables, honey, seeds, livestock or soil across the WA border. If you are carrying these items, you need to declare them to the border staff. While most people know to surrender their fresh fruit and vegetables at the WA border, they may not understand that some critical pests and diseases are present in WA and can be spread further by moving fruit and vegetables across WA. For examples, fruits and vegetables cannot be taken into the Ord River Irrigation area near Kununurra. This is to prevent the introduction of Mediterranean fruit fly to the area, as it is only established in the southwest between Carnarvon and Esperance (Club, 2020). Another intra-state restriction is the movement of honey and bee products out of the Kimberly region; this is to protect our bees by preventing the small hive beetle (Image below) from spreading to the rest of the State.

When you are out and about enjoying WA, you can help by implementing some pretty simple actions such as, brushing off dirt from shoes and camping equipment and bagging food scraps will go a long way to keeping the State safe from internal biosecurity threats whilst also declaring any items to border staff when arriving in WA from either interstate or international travel.

The biosecurity guidelines are not tough and should be part of your standard travelling practices. More detailed information and lists of all biosecurity threats and movement restrictions can be found on the DPIRD website at www.agric.wa.gov.au (DPIRD, 2020a; DPIRD, 2021).

If you or your company need more information or guidance on biosecurity in Western Australia, give ISPL a call or email us at Integrate Sustainability on (08) 9368 0338 or enquiries@integratesustainability.com.au.

Club, W. A. (2020, October). Biosecurity for WA and Travel Tips. Retrieved from Encouraging the study and protection of the natural environment: https://www.wanaturalists.org.au/news/biosecurity-for-wa-and-travel-tips/

DPIRD. (2020a, October 2). Movement restrictions of plants within Western Australia. Retrieved from Agriculture and Food: https://www.agric.wa.gov.au/plant-biosecurity/movement-restrictions-plants-within-western-australia