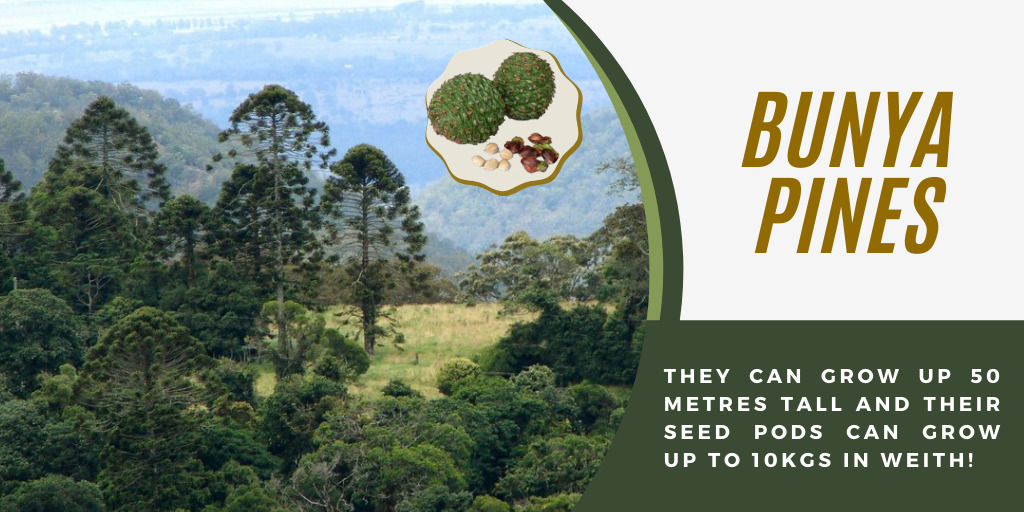 The bunya pine, or Araucaria bidwillii, is one of the most impressive trees in Australia, famous for its large cones, delicious seeds and incredible height. Based on its common name, we might assume that this tree is a type of pine, however, as the scientific name shows, the bunya pine belongs to the family Araucariaceae, a very ancient family of coniferous trees.

The bunya pine can grow between 20 to 50 metres tall, with a straight, rough-barked trunk, and a very distinctive symmetrical, dome-shaped crown. According to the records of the specialist Robert Van Pelt, the tallest Bunya Pine found reached 51.5 m in height (Pye, M.G., Gadek, P.A 2004).

There are some distinctive differences between the male and female trees, for example:

The male cones are narrow, cylindrical structures about 20 cm long on the ends of short branchlets. They usually appear in autumn.

The female fruiting cones are enormous round cones which generally mature in summer through to early autumn, but they typically fruit once every three years. The female seed pods can grow up to 10kgs in weight containing 50 – 100 seeds. These pods have been known to drop from up to 50 meters without warning, causing severe harm or death to anyone below.

Bunya Pines are endemic to the subtropical rainforest climate of Queensland, where heavy rains occur in summer and a dry season occurs from April to September. Approximately 200km north-west of Brisbane, is the largest concentration of the bunya pines within Australia. These are protected within the Bunya Mountains National Park, a spiritually significant place to the traditional custodians of the New South Wales and Queensland Estate.

The Bunya Pine is known by many names among the many Aboriginal groups who travelled across New South Wales and Queensland to gather within the Bunya Mountains. Banza-tunza, boonya, bunyi, and bonyi-bonyi are just some of the indigenous names for the bunya pine (Huth, J. 2002).

The seeds of the Bunya Pine are considered a sacred fruit, only eaten during major seasonal ceremonies. Every three years, when the yield of seeds peaked, Aboriginal groups would gather among the forest to celebrate the harvest and feast on the seeds. These gatherings were incredibly important socially, culturally and spiritually (Howzworth and Huth 2005). It was a time to trade, solve disputes, arrange marriages, perform ceremonies, develop and enforce laws, review spiritual connections, and to revitalise spirits.

The decline of the Bunya Pines

As written by Howzworth and Huth (2005), the early loggers harvested bunya pines for the quality wood they produce. From the time of european setttlement, up until 1950, around 25 sawmills are believed to have operated on or around the Bunya Mountains. By the late 1840’s all of the land around the Bunya Mountains was taken up by large sheep and cattle runs. The replanting of the trees on farmland was insignificant resulting in a substantial decline of the species (Howzworth and Huth 2005).

Despite national park status, and contrary to today’s strict legislation, the park’s timber continued to be cut and sold until about 1917. There were approximately 510 hectares of bunya pine plantations on state land in Queensland in 1980, recently only 368 hectares exist. The isolated northern subpopulation has less than 100 mature individuals (Pye, M.G., Gadek, P.A 2004).

Nowadays, the Bunya Pine faces a different treat caused by a soil-borne water mould called Phytophthora and climate change (Khan 2019). Phytophthora is a type of water mould, which behaves just like a fungus, although to be a completely different group of organisms. It lives and is transported in soil, it attacks the roots of plants and trees, eventually preventing the organism from getting any any food or water. The initial symptoms of infection are dieback of the tree crown — the top part of the tree, as you can see in the figure 5 — followed by death over a few months, said Dr Shuey (Khan, Jo; 2019).

The “race” to protect Bunya Pine began in 1881 when a wood reserve was declared with over 12,150 hectares. After more than 20 years of lobbying against robust wood and pasture interests and numerous visits by forest inspectors, a 9,112-hectare national park was declared in July 1908.

According to The State of Queensland (Department of Environment and Science) 2017–2020, the Bunya Mountains National Park is today the largest protection project of Bunya Pine, not only for protecting this specie but for taking care of all the biodiversity necessary for the ecosystem`s balance (Department of Agriculture and Fisheries 2020).

Another tool that can help to monitor and protect Bunya Pine is the Red List of Threatened Species, created by the International Union for Conservation of Nature – IUCN. It is a comprehensive inventory of the global conservation status of plant and animal species that evaluate the extinction risk of thousands of species. The Institute is recognised as the most authoritative guide to the status of biological diversity.

Currently, the IUCN Red List categorised the Araucaria bidwillii as a species of ‘Least Concern’ (IUCN Version 2020-2), as shown in figure 6. However, the ongoing decline of the Bunya Pines requires action.

Also, for the treatment of soil-borne water mould diseases called phytophthora, scientists will trial the use of phosphite — a fungicide — in the plantation of Bunyas, to be able to control the spread of the disease in the wild trees. Monitoring and testing of new areas are planned, and both the Queensland Parks and Wildlife Service and the Department of Agriculture and Fisheries have been meeting with the Bunya People’s Aboriginal Corporation about management plans.