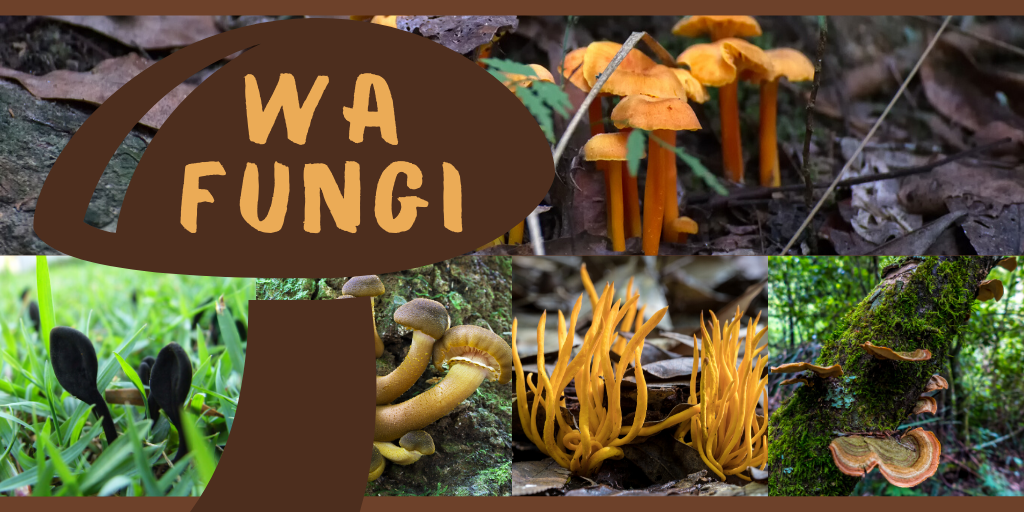 Fungi can be grouped into three major types:

Many of us are familiar with mushrooms; we often see them growing in our gardens after recent rain. However, the mushroom that we see above the ground is only the ‘fruiting body’ of the fungi that develop at certain times of the year. Most of the time, fungi exist as microscopic filaments called hyphae (Department of Biodiversity, Conservation and Attractions, 2019). Macrofungi can be found in a diverse range of habitats, primarily terrestrial, and not only in well-watered areas, as many would think (Lepp, 2012).

The importance of fungi

Fungi are an important part of our ecosystems. They play a vital role as natural recyclers of organic material. Different types of fungi can:

Not many of our local fungi have common names, even the common and readily identifiable ones. Generally, you can see the fruiting bodies of fungi in Autumn and Winter. It is not unusual for fungi species to appear slightly different across different regions (L.Bougher, 2007). Below are some common and unusual fungi species you may see in Western Australia:

While many plants have a symbiotic association with fungi in their natural environments, the symbiotic relationship between orchids and their symbiotic fungi is unique. Our native orchids rely on fungi within the cortical cells of their roots, stem or seedlings to germinate and obtain nutrients from the soil (because most orchids do not have the capacity to draw these nutrients from the soil with their reduced or non-existent roots) (Brundrett, 2010). As a result, conservation efforts to propagate rare and endangered orchid species is extremely difficult. Recently, Kings Park and Botanic Garden researchers were able to germinate seedlings from the Queen of Sheba orchid (Theylmitra variegate) from symbiotic fungi extracted from a wild orchid (Botanic Gardens & Parks Authority, 2020).

Near Boddington last year (2019), scientists discovered a unique phenomenon – gold-coated fungi in the soil. The fungus is a strain of the filamentous Fusarium oxysporum, a type of soil fungi found worldwide and is considered a plant pathogen (The University of Adelaide, 2016). The fungus was found to dissolve gold by producing a superoxide chemical and then transforming the gold into tiny nanoparticles that are fixed to the fungus strands (Salleh, 2019). Not much is known about why the fungi are attracted to gold. However, it has been observed that the strands of gold-coated fungi grew more vigorously than those that were not absorbing gold (Lehmann, 2019).

In our South-West, areas around Manjimup and Pemperton, are famous for their commercial plantations of Black Truffles. Black Truffles are not native to Australia. They are an introduced species from Western Europe that are cultivated by inoculating host tree seedlings with truffle spores. The seedlings are planted in fields, and then the truffles are harvested using specially trained dogs in five to seven years. Truffle crops are highly valuable; however, due to their high demand for capital expenditure and specific conditions, many crops fail (Alison Mathews, 2018).

If you are interested in our local fungi or would like to identify a species, there are several resources on West Australian fungi available that may be able to help:

Like native plants and animals, it is illegal to collect fungus from national parks or state forest (without a permit) (Department of Biodiversity, Conservation and Attractions, 2019). So please remember to look and perhaps photograph, but not touch!