Aboriginal Heritage – The Need for Change 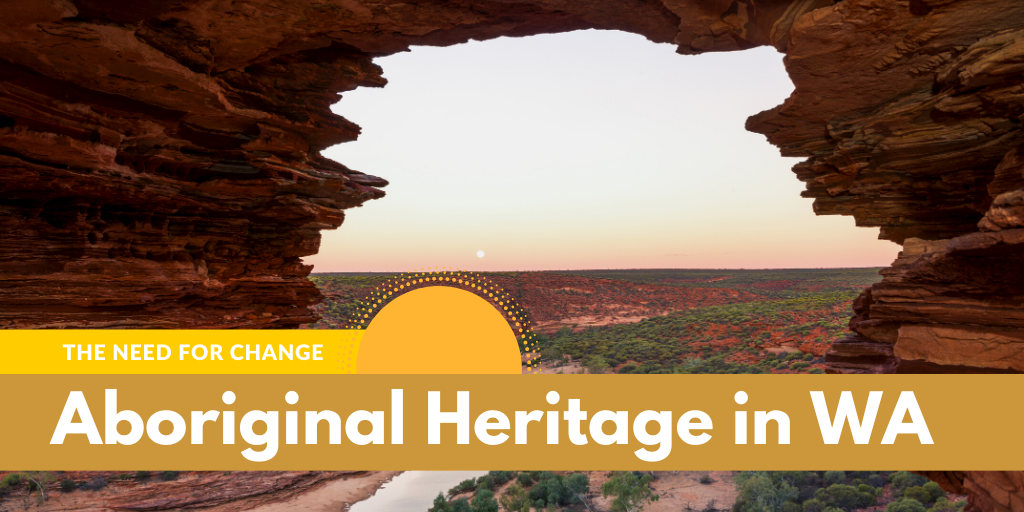 Heritage in Western Australia is protected and regulated under two separate Acts – the WA Heritage Act 2018 and the Aboriginal Heritage Act 1972. The current Aboriginal Heritage Act makes provisions on behalf of the community for the preservation of places and objects customarily used by or traditional to the original inhabitants of Australia or their descendants (or associated therewith, and for other purposes incidental thereto).

This insight focuses on the review of the Aboriginal Heritage Act 1972 (the Act) and the planned replacement Act. We also touch on the limitations of the current Act, what the desired outcomes of the review are and what the proposed changes mean for industry.

It is important to note that the Act is currently still in the review process, with the final round of public review scheduled for late 2020. Therefore, matters discussed in this insight may only be applicable up until this process is complete.

Limitations of the Current Act

The Aboriginal Heritage Act was once viewed as pioneering. However, as a result of population growth and industrial expansion, it is now criticised as being ineffective in the face of Western Austalia’s heavy reliance on an extractive economy (Vaughan, 2016). In fact, there have been many highly publicised instances of development impacting heritage values such as:

Criticism of the Act is largely centralised on section 18, whereby a developer may make an application to impact a site (Vaughan, 2016; Barnsbry, 2013). Between 2008 and 2013, 646 section 18 applications were lodged with the WA Department of Aboriginal Affairs (now the Department of Land Planning and Heritage), of which only one was refused (Vaughan, 2016), despite the recommendations made by the Aboriginal Cultural Materials Committee (Barnsbry, 2013).

The feedback obtained from the Phase 1 Consultation Process concluded in June 2018, highlighting the many issues of the current Act. Some of the issues raised during the consultation, as reported by the Department of Planning, Lands and Heritage (2019), include:

Indigenous heritage conservation and management aims to sustain the relationship between Indigenous people and their heritage places in a way that ensures the heritage values of each place is maintained for present and future generations (Australian Heritage Commission, 2002).

The Aboriginal Heritage Act discussion paper very clearly portrays the Governments desired outcome for the new legislation. That is, as stated by the Minister for Aboriginal Affairs, a commitment to ensuring we have a modern legislation that effectively recognises, protects and celebrates the cultural heritage of Aboriginal Western Australians and operates transparently and efficiently (Wyatt MLA, 2019).

The discussion paper included a number of proposals aimed to deliver more effective protection, conservation and management of Aboriginal cultural heritage in Western Australia. Without getting into the nitty-gritty of each proposal, the key desired outcomes of each has been summarised below. To view the proposals in more detail, please visit www.dplh.wa.gov.au.

Of all the proposals, the consultation process showed an overall greatest support for the repeal of the Act; with 100% of Aboriginal Organisations and Industry respondents supporting the decision (Department of Planning, Lands and Heritage, 2019b). Despite the apparent overall support for updating the definitions and scope of the Act (Proposal 2), there were mixed views with how this is to be done. The Summary of Responses identified two distinct views. The first, broadening the scope to reflect the Aboriginal people’s views of what constitutes their heritage is a move in the right direction and the second, doing so will result in confusion and add a level of difficulty to assessment processes and applications (Department of Planning, Lands and Heritage, 2019b).

While none of the proposals were opposed by a majority, some clearly received less support and showed division between groups. Industry was shown to support the nomination of Local Aboriginal Heritage Services (LAHS) (Proposal 3A). However, they were less supportive of the Establishment of an Aboriginal Heritage Council. The opposing opinion was shown by the responses of Aboriginal Organisations and Heritage Professionals (Department of Planning, Lands and Heritage, 2019b). It is envisaged that the LAHS will be initially established by existing Aboriginal organisations and will have a statutory role to ensure the right people speak for country, coordinate consultation, and facilitate agreements. Despite the benefits of this, many Aboriginal corporations are under increasing pressure to engage with complex heritage compliance frameworks linked to industry production cycles, while being inadequately resourced to do so (Verth, Dortch, Thomson, & Jeffries, 2019). This move would add increased pressure.

It was also recognised that there is a need for a system which accurately catalogues Aboriginal heritage places (Proposal 4) and noted the importance of imposing minimum standards of information to increase its reliability. Despite receiving majority support or neutral feelings from most responders, 40% of Aboriginal organisations opposed the proposal (Department of Planning, Lands and Heritage, 2019b).

For more information regarding the responses to the ‘Review of the Aboriginal Heritage Act 1972 Consultation Phase 2’, please view the Summary of Responses.

Change to the view of Places

A significant downfall of the current Act is it applies only to places and objects and therefore does not adequately reflect Aboriginal cultural heritage (Department of Planning Lands and Heritage, 2019a). The Indigenous view of the land is much deeper than the physical aspects and instead incorporates a profound spiritual connection. Aboriginal law and spirituality are intertwined with the land, the people and creation forming their culture and sovereignty. It is because of this connection that when land is disrespected, damaged or destroyed, there are real impacts on the wellbeing of Indigenous people (Korff, 2019; Behrendt, 2015).

The new Act proposes to adopt a new definition of ‘place’ to align with the Australia ICOMOS Burra Charter, which defines place as:

“Place means a geographically defined area. It may include elements, objects, spaces and views. Place may have tangible and intangible dimensions.”

While it is impossible to deduce all of the implications of the new Act in the current stage of the process, some comments can be made regarding some of the new proposals. Herbert Smith Freehills (2019) identified a number of potential impacts. By broadening the scope of the Act from the previous place-centric focus, there may also be a need to change the approach taken in heritage risk assessments as approvals may be required for a greater number of sites and areas. The changes proposed for proposals have several benefits; such as the approval process becoming streamlined with other environmental approvals (reducing duplication), all land users can apply for approvals (rather than just the owners), and the approval will become tied to the land so that subsequent land users do not have to obtain new approvals for the same activity. The transparency alluded to as a result of the proposed changes to the Act has pros and cons While the changes allow for a greater capacity for parties to understand the decision they also allow for parties to challenge and influence decisions. Finally, the increased enforcement regimes result in harsher penalties and may affect work and timelines (Debenham & Wilson, 2019).

Should you need assistance with development heritage management or further understanding your current or future obligations, please email enquiries@integratesustainability.com.au or call Integrate Sustainability on 08 9468 0338.

Department of Planning Lands and Heritage. (2019a). Review of the Aboriginal Heritage Act 1972. Perth, WA: Government of Western Australia.