Where has all the rain Gone? 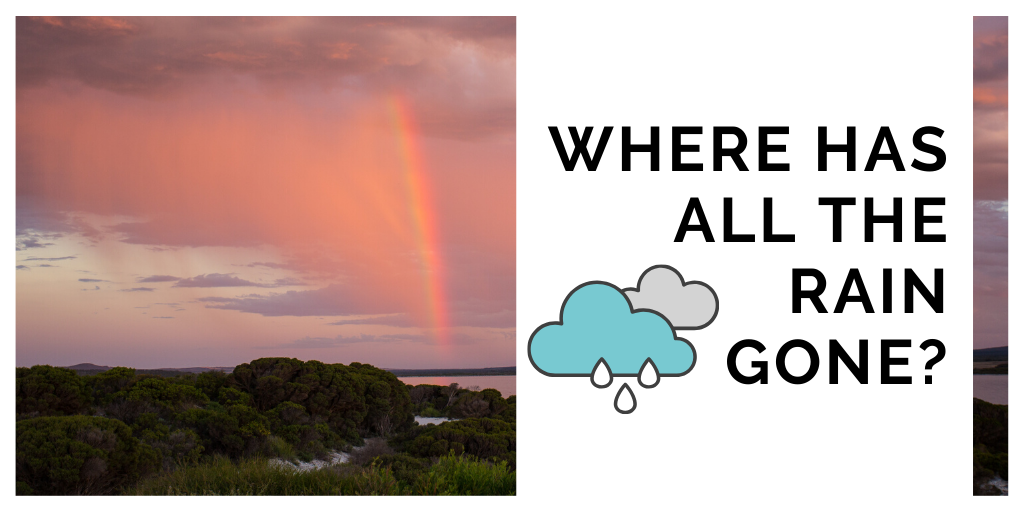 It doesn’t take a weather enthusiast to recognise the dry Australian climate.  If you cast your mind back over the last 12 months, it’s hard not to recall the sweltering summer days dominating the year and harder to remember a period of frequent rain.  In fact, when you start looking at the data, all months recorded a below-average rainfall with the annual total being 49% below the mean for WA, making it the second driest year on record (BoM 2020).  Over the last four decades, much of the western half of WA has seen a decline in total rainfall received, with some areas receiving up to 80mm less rain.  So where is the rain going?  If you turn to the media, the answer is polarising due to a divisive split between believers of human-induced climate change and those against it.  Truth be it, despite the natural fluctuations exhibited by a changing climate, humans have had an impact. This insight will look at climate change, the impact of human activities and seeks to answer some of the question being asked, where has all the rain gone?

These climate cycles are responsible for the natural warming and cooling of the Earth’s atmosphere and can, therefore, influence things like rainfall via the heating of the oceans and increase in evaporation.  Studies suggest that as much as 0.3℃ of warming between 1970 and 2000 can be attributed to a natural warming cycle (Bell 2012). Despite this, the rises in temperature are now well above the natural climate cycle of the last 800,000 years, making it more likely that recent warming is a result of human activity (Committee on Climate Change 2020).

Anthropogenic climate change is the change of the Earth’s climate as a result of human activity.  These activities include the burning of fossil fuels, agriculture and land clearing and ultimately result in the enhanced greenhouse effect or global warming (Department fo Agriculture, Water and Environment 2019).  In Western Australia, the mean temperature in 2019 was 1.67℃ above average, making it the warmest year on record (BoM 2020a). So, what does this mean in terms of rainfall?

As the climate warms the water-holding capacity of the atmosphere increases by approximately 7% per degree (Hausfather 2018).  Ultimately the increased moisture in the air will result in increased rainfall; however, this is expected to fall as heavy rain events (CSIRO 2018) and not to fall evenly across the planet. Due to changing weather patterns and other factors, certain areas will be expected to receive more rainfall and others less (Hausfather 2018).  This is visible when looking at the total rainfall between 1980 and 2019 whereby rainfall along the coast of WA, particularly the south-west declines while inland Australia increases. In the study conducted by Hausfather (2018) which used a variety of climate models to predict precipitation changes at the end of the century, in at least 9 out of 10 of the models, it was shown that by the end of the century (2100), with global warming the south-west of Australia will continue to receive less precipitation (approximately 20-40%).

Human actions have impacted climate trends in more ways than global warming.  Studies have found that land clearing has a direct impact on rainfall.  It is estimated that 40% of rainfall is generated from evaporation from land and transpiration from vegetation (Pugh 2017).

Plants generate their own rainfall by recycling the water from the soil into the atmosphere through transpiration.  This creates updrafts that facilitate condensation as warm air rises and cools, creating pressure gradients (Pugh 2017).

It is believed that greater than 50% of the rainfall decline in south-western WA since 1970 is the result of land clearing (Pugh 2017), (Imberger 2013).  The reduction is the result of:

This is supported by a study conducted by in 2012-2013 (Pitman et al. 2012) and (Imberger 2013), where it was concluded that large scale land cover change contributed significantly to changes in precipitation.  Following large scale reduction of native vegetation in the Wheatbelt from 1950-1970, an average inland rainfall decline of 21% was recorded. Land clearing from 1960-1980 result in a 16% reduction of rainfall (Imberger 2013).

What can you do?

Climate change is happening, and it is now more important than ever to act.  Extreme weather events are making water scarcer, more unpredictable and more polluted (UN Water 2020).  Climate change is rapidly becoming more accepted on a global scale and more importantly, within the Australian Government, but it is up to everyone to do their part. There are many things that you can do:

For more ideas, please visit the Climate Council or World Water Day to access additional resources.  To learn more, jump online and have a look at what events are happening near you regarding sustainability and climate change.

For help introducing sustainable practices into your business, please give us a call 08 9468 0338 or email enquiries@integratesustainability.com.au

Imberger, Mark A Andrich and Jörg. 2013. “The effect of land clearing on rainfall and fresh water resources in Western Australia: A multi-functional sustainability analysis.” The International Journal of Sustainable Development and World Ecology.