Fungi of WA – Did you know? 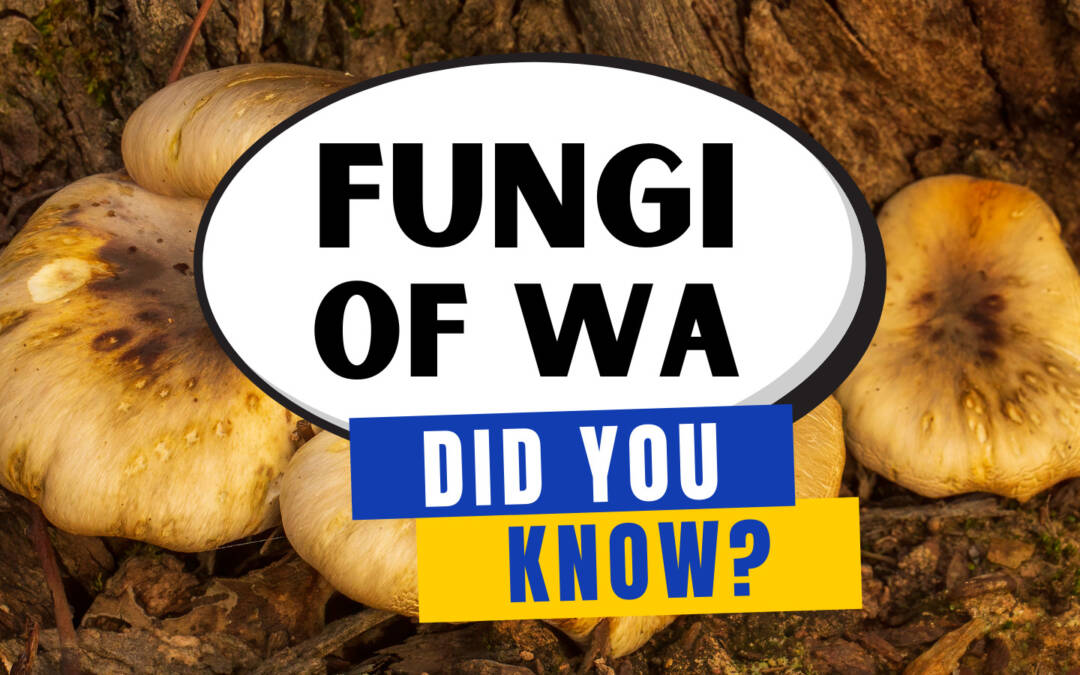 In the “Tree of Life”, fungi were traditionally classed as plants. However,  nowadays, specialists explain that they are more closely related to the Animal Kingdom than the Plant Kingdom. Ecologist Robert Whittaker first proposed that Fungi have emerged to have their own kingdom because they acquire nutrients in a unique way through the secretion of digestive enzymes rather than through photosynthesis like most plants do. Figure 1 represents the five kingdoms proposed by Whittaker in his 1969 article in Science, highlighting the various modes of obtaining nutrition (Brian Lovett 2021).

Fungal species are diverse, with many unique properties: some are innocuous, some useful, and some are harmful. They participate in critical processes for environmental sustainability by effectively uniting soils, plants and animals to create a cohesive and healthy system. This process involves carrying nutrients by capturing, storing, releasing and recycling carbon through their vast network of threads.

Fungi are estimated to contribute to 25% of the total biomass on Earth. Approximately 250,000 fungi species (estimated between only about 5-10% of the potential existing species) have been catalogued in Australia, including microorganisms like mould, yeast, and mushrooms. Australia also has many endemic truffles and is home to the bona fide truffle capital of the world. It is estimated around 1,200-2,400 truffle species exist within Australia, but only 10-25% are known so far (Bougher 2009).

Benefits of fungi range from providing essential nutrients to plants to medical improvements, environmental protection and restoration and improved efficiency in agriculture. Fungi can also be used in the production of chemicals and the drug manufacturing industries.

The fungus tradition goes back a long time in Western Australia. For thousands of years, Aboriginal fungal lore and knowledge have been passed through generations. Records began in the 19th century when various European settlers and explorers recorded Aboriginal uses and beliefs about fungi. The first records about Fungi were in 1841 when explorer George Grey published an account of his travels in Western Australia and reported that he’d seen seven species of fungi eaten by the Aborigines (Herbarium 2013).

Western Australia has an estimated population of about 140,000 fungi species.  While many areas in Perth have not been surveyed for fungi, some detailed surveys have been undertaken. Bold Park, one of Perth’s major inner-urban bushlands (437 hectares), is an area that has been surveyed with over 350 species of macrofungi recorded. Specialists believe other urban bushland areas, such as Kings Park, may also be host to a large number of fungi species (Bougher 2009).

Fungi may fruit at any time of the year in temperate regions. However, within the Perth region, there are two distinct periods (Bougher, Neale L. 2017):

Australia has become the world’s fourth-largest producer of the most-prized black gold truffle, and the small town of Manjimup, situated east of Margaret River in WA, is known as the bona fide truffle capital of Australia. The region is accountable for around 85 per cent of our annual crop. The richness of the soil, along with the cool climate, make it perfect for growing the beloved fine-dining staple (Bougher, Neale L. 2017).

Fungi Risks and Benefits to the Environment and People

An example of how fungi can be harmful to the environment is the Phytophthora cinnamomi, commonly known as “the biological bulldozer”. It is listed as a critical threat to species under the Commonwealth Environment Protection and Biodiversity Conservation Act 1999 (EPBC Act) (Commonwealth of Australia 2017). Phytophthora cinnamomi is a soil-borne plant pathogen that causes the disease Phytophthora dieback. It destroys native forests, bushland grasslands and orchards around the world. It destroys entire plant communities and can cause the extinction of plant species in South West of Western Australia, where more than 40 per cent of native plants are susceptible to the disease (WA 2021). The area of land infected in Western Australia by Phytophthora dieback is equivalent to over one million hectares. There is no known cure for Phytophthora dieback; however, some possible management methods include (UC IPM 2017):

Another dangerous fungus is the “Marbled Death Cap mushrooms”, which in 2016, was found growing in Denmark – WA (Department of Health, Western Australia 2021). The Marbled Death Cap (Amanita marmorata) looks similar to the edible, non-toxic field mushroom (Agaricus sp.) found in many supermarkets or greengrocers, however it can be potentially deadly. It is a large mushroom with a marbled white, greyish or brownish cap and white gills underneath; the poison is in the cap, gills, stem and spores. After initial consumption, gastro-intestinal symptoms usually develop within 6 to 24 hours, and in some cases, death can occur within as little as 48 hours (Department of Health, Western Australia 2021). Mortality rates from Death Cap mushrooms are around 50 per cent.

Although some fungi can be harmful to the environment and people, you do not need to worry. You can stay informed through programmes that support and protect us from the problems caused by these species, such as Fungimap. Fungimap is a national, non-profit citizen-science group formed in the mid-1990s to enable individuals with knowledge of their local fungi, to share that knowledge within the scientific community and help fill the gap in our understanding of fungi. Fungal surveys will help confirm the distributions and habitats of species already well-recorded, locate and document new species, and contribute to our understanding of how fungi are likely to respond under threat. You can access their website through the link https://fungimap.org.au/. Another institute helping in the challenge to identify and monitor Fungi through the records and images observatory portal is the Atlas of Living Australia (www.ala.org.au).

In fact, fungi can contribute many benefits to the environment, for example (Bougher 2009):

Australia also has a good history with Medicinal Fungus. The well-known antibiotic drug penicillin is derived from the fungus Penicillium. Penicillins are a group of antibacterial drugs that attack a wide range of bacteria. They were the first drugs of this type that doctors used. The discovery and manufacture of penicillins have changed the face of medicine, as these drugs have saved millions of lives. Figure 6 shows the step by step manufacturing process to produce Penicillin. More recently, Australia’s first legal collection of native “Psychedelic Renaissance” mushrooms could provide medical options to treat severe depression, alcohol and drug addiction and post-traumatic stress disorder (PTSD).

Agriculture is another sector that has been developing and taking advantage of “fungi’s special abilities”. There are many research programs across the globe and in WA that intend to improve agriculture:

The importance of Fungi in our ecosystems cannot be undervalued. Unfortunately, there is a whole lot that we are yet to discover about our local fungi species and their impact. The assessment of Fungi is complex and needs professionals qualified to analyse any environmental impact generated. Thus, if you or your organisation would like to develop a research or report about Biodiversity or conduct an environmental impact assessment, Integrate Sustainability may be able to help.  Please contact us by email at enquiries@integratesustainability.com.au or call us on 08 9468 0338.