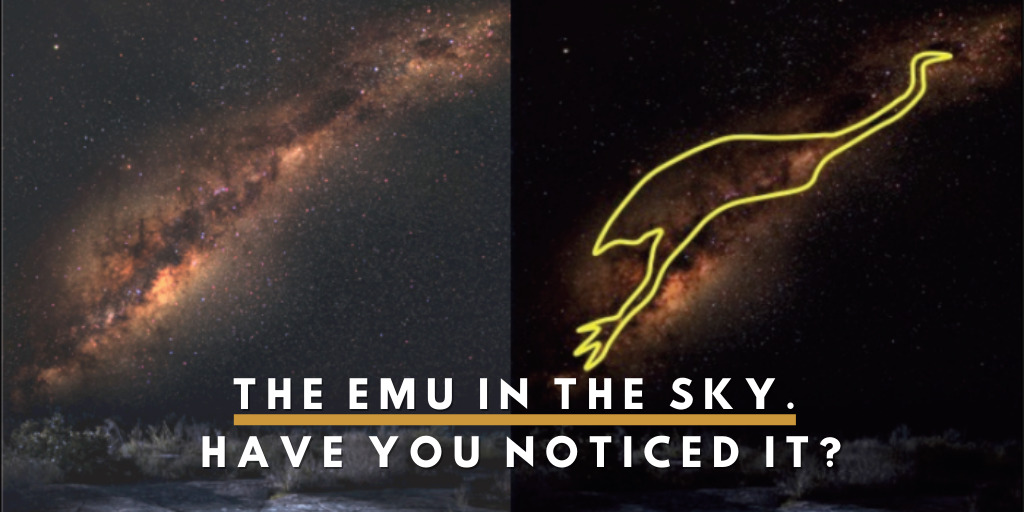 Long ago, before the Babylonians, Greeks, the Renaissance, and the age of Enlightenment, the Aboriginal and Torres Strait Island were reading the stars. The First Australians are the oldest continuing cultures in the world, stretching back over 65,000 years. This makes them the oldest astronomers (Australian Indigenous Astronomy, 2020). Through traditional astronomy practices, the Aboriginal and Torres Strait Islander people have developed calendars, can predict weather and even navigate the land through the practical ways they observe the Sun, Moon and stars.

The Sun, the Moon and the Emu in the Sky

Aboriginal star stories are more than stories, they are lessons that educate about the relationship between the sky and the land, as well as how the universe functions around us.

Different groups across the country have different stories for the same constellations. In many Aboriginal cultures, the Sun is a woman and the Moon is a man. In some communities, they describe the Sun woman as pursuing the Moon man across the sky from day to day, occasionally meeting during an eclipse (Australian Indigenous Astronomy, 2020). For other tribes, the Moon is reaching obesity (when at full Moon) and needing to be cut down to lose that weight, and other see the Sun as a woman walking through the dark sky with a torch on a search (ABC, 2017).

The Arnhem Land stories tell us “When the tides are high, water fills the Moon as it rises. As the water runs out of the Moon, the tides fall, leaving the Moon empty for three days. Then the tide rises once more, refilling the Moon” (Australian Indigenous Astronomy, 2020). This is a great example of how Indigenous Australians used the sky and stories to explain the natural relationship between the Moon and the tides.

One of the most commonly shared stories is of the “Emu in the Sky”. For western astrologers, it is comprised Coalsack nebula (the head of the Emu), while its neck, body, and legs are formed from the dust trails stretching across the Milky Way (Ancient Origins, 2020).

The Kamilaroi and Euahlayi peoples from Northern NSW tracked the movement and orientation of the Emu across the sky to track the breeding season of the Emu on land (The University of Melbourne, 2017). During April –May, the Emu first appears full in the sky and is angled in such a way it appears to be running. This coincides with mating season on land, where the females run to pursue the males.

In June- July the Emu moves to the horizontal sitting position, signalling the nesting season. This is where the Emu eggs are available for collection as they are an important food source for winter.

In August, the Emu in the sky leaves the nest and heads west, signalling that it is too late to collect the eggs, as they begin to hatch.

In the Western world, our constellation is largely based around ancient Greek mythology, the most recognisable being Orion, or as we in Australia refer to it, the saucepan. In Wiradjuri Aboriginal traditions of central NSW, Baiame is the creation ancestor, seen in the sky as Orion. He is nearly identical in shape. The story goes that Baiame tripped and fell over the horizon as the constellation set, which is why he appears upside down.

Another well-known Greek constellation is Gemini, which is viewed by many Aboriginal groups as brothers. The Wergaia people of western Victoria call them Yuree and Wanjel; hunters who pursue and kill the kangaroo Purra. In the Wergaia traditions, the brothers take the form of animals: Yuree, the fan tailed cuckoo, and Wanjel, the long-necked tortoise (Hamacher, 2017).

The Tagai constellation is depicted as a man standing in a canoe (Scorpius) in the Milky Way. He holds a spear in his left hand (the Southern Cross) and in his right hand (Corvus) he holds a fruit called Eugina. Tagai’s story originates from the Torres Strait Islanders. Tagai is a fisherman who one day sets out with a crew of 12 powerful spirits (zugubals) who influence the seasons, wind and water. One day they were not having much success catching fish, so Tagai left his crew and set out to search for fish on a nearby reef. The day grew hot and the crew were thirsty, but there was nothing to drink except for their leader’s water. They decided to drink it.

When Tagai returned he was furious that they had drunk all his water and he killed them, sending them back up into the sky. He divided the crew in two groups – six of the men were placed in Usual (the Pleiades) and the other six in Utimal (Orion) and told them to stay away from him (Ancient Origins, 2020).

The Indigenous Australian Aboriginals and the Torres Strait Islanders have lived on this land for over 65,000 years. With their connection to the sky, oceans and land, they have so much knowledge to give. Only through listening, feeling and with a true open heart will we be able to learn what they have always known. Integrate Sustainability encourage every Australian to take the time to learn more about Aboriginals and Torres Strait Islanders culture and traditional knowledge in their local area, by learning more we can make a better future for all Australian.