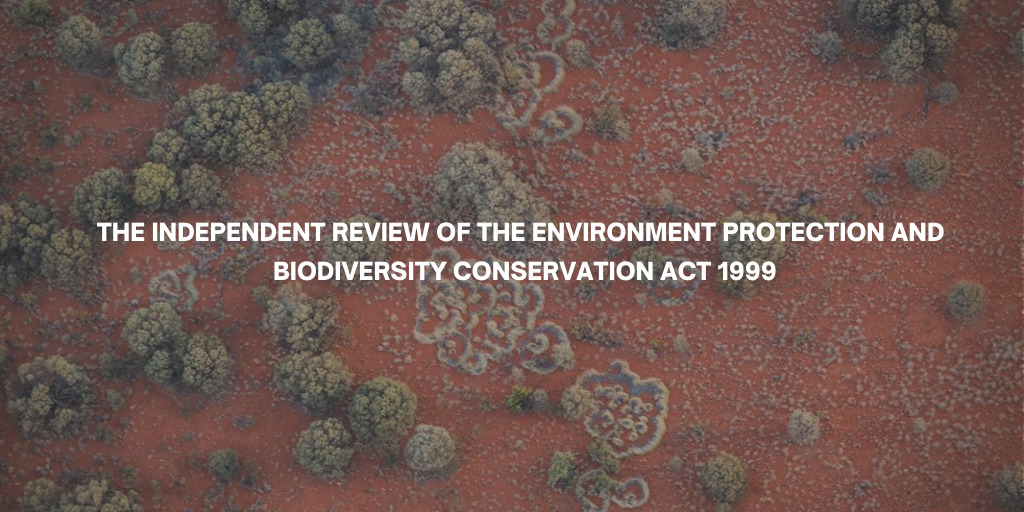 Within the Environment Protection and Biodiversity Conservation (EPBC) Act 1999, there is a requirement for the Act to be independently reviewed at least once every ten years. The second statutory review of the EPBC Act commenced on the 29th of October 2019 and is being conducted by Professor Graeme Samuel AC and an expert panel (DAWE, 2020). To date, the Review has involved extensive consultation with stakeholders and consideration of submissions on the operation of the Act (DAWE, 2020). On the 20th of July, an Interim report was released part-way through the Review. The Interim Report outlines the preliminary views on the EPBC Act and how it operates. The report is structured around the key problems identified by the Reviewer and the proposed reforms to address these.

The EPBC Act is “ineffective”

Australia’s natural landscapes and species are iconic, and yet we have one of the worst track records of species extinction globally (Kearney, et al., 2019). At least three extinctions have occurred since 2009 and many of our listed critically endangered species and communities are continuing to decline (Kearney, et al., 2019). This is unsustainable and can be argued to be a direct reflection of how Australia’s national environmental legislation currently operates.

Reflecting the above, the Review is critical of the EPBC Act stating that it is “ineffective” and “does not allow the Commonwealth to play its role in protecting and conserving environmental matters that are important to the nation” (Samuel, 2020). Throughout the Interim Report, there is a strong position that the current regime does not adequately protect environmental values and both the community and industry are dissatisfied for various reason. Overwhelmingly the community is distrustful of the EPBC Act to deliver effective environmental outcomes while industry views the Act as cumbersome, duplicative and slow (Samuel, 2020).

“The current environmental trajectory is unsustainable” – so what are the options?

The Interim Report identifies 30 areas for improvement and regulatory reform. These include:

Two areas of reform provide significant opportunity to improve environmental regulation and management in Australia. These are discussed below.

The most fundamental reform discussed in the Interim Report is the development of National Environmental Standards as the foundation of the EPBC Act. Currently, the EPBC Act has no comprehensive mechanism to describe the environmental outcomes it is seeking to achieve or to ensure decisions are made in a way that contributes to them (Samuel, 2020). The Interim Report identified that Ecologically Sustainable Development (ESD) should be the overall outcome the Act seeks to achieve and that legally enforceable National Environmental Standards should be made to set the foundations for effective regulation, to ensure that decisions made under the EPBC Act clearly track towards ESD (Samuel, 2020).

The suggestion in the Interim report is for standards on:

The establishment of National Environmental Standards was highlighted by several stakeholders during the consultation phase of the EPBC Act review (Samuel, 2020). Should this be an accepted reform there are several positive outcomes that could eventuate in national environmental management such as:

However, if National Environmental Standards are vague and not developed in consultation with key stakeholders, they may provide more of a regulatory hindrance and the environmental outcomes envisaged won’t be reached.

The Review has identified that “the EPBC Act has failed to fulfil its objectives as they relate to Indigenous Australians” (Samuel, 2020). Primarily this relates to how heritage, biodiversity conservation and engagement of Aboriginal and Torres Strait Islander people is managed under the EPBC Act.

In the space of utilising indigenous knowledge and practices in environmental management, the EPBC Act has lagged behind leading practice whereas this is becoming a mainstream approach for other states, territories and internationally (Samuel, 2020). As a way to address this, the Interim Report suggests:

These proposed reforms have a genuine potential to improve heritage protection, improve relationships between proponents; Government and Aboriginal Australians through effective and open engagement and recognise the value that Traditional Knowledge has for environmental management.

One of the major threats globally is climate change, and this barely featured mention in the Interim Report. The threat of climate change has been acknowledged in the Interim Report, but specific management or its inclusion into the EPBC Act is not included. The only mention of climate change relates to greenhouse gas emissions, stating that specific mechanisms and laws to implement commitments to reduce greenhouse gas emissions are better placed outside of the EPBC Act (Samuel, 2020).

Other suggestions for triggers and expanding matters of national environmental significance have also been omitted. Some of these suggestions included key threatening processes (land clearing, invasive species), climate change and emissions. The potential duplication between state and territory processes were deemed as the reasoning behind not expanding matters of national environmental significance (Samuel, 2020).

The Interim Report is available for review online:

The Interim Report was open for feedback from the community and industry for a period of four weeks following publication. Following a review or feedback on the interim report, a Final Report and recommendations are due to be completed and are scheduled to be available by the end of October 2020 (DAWE, 2020).

The EPBC Act has been subject to a previous review from which only minimal recommendations for reform were actually implemented. The Interim Report outlines some positive reforms which could improve environmental management and compliance, but the question remains, will these actually be embedded into the EPBC Act and implemented?

DAWE. (2020). Independent review of the EPBC Act. Retrieved from https://epbcactreview.environment.gov.au/