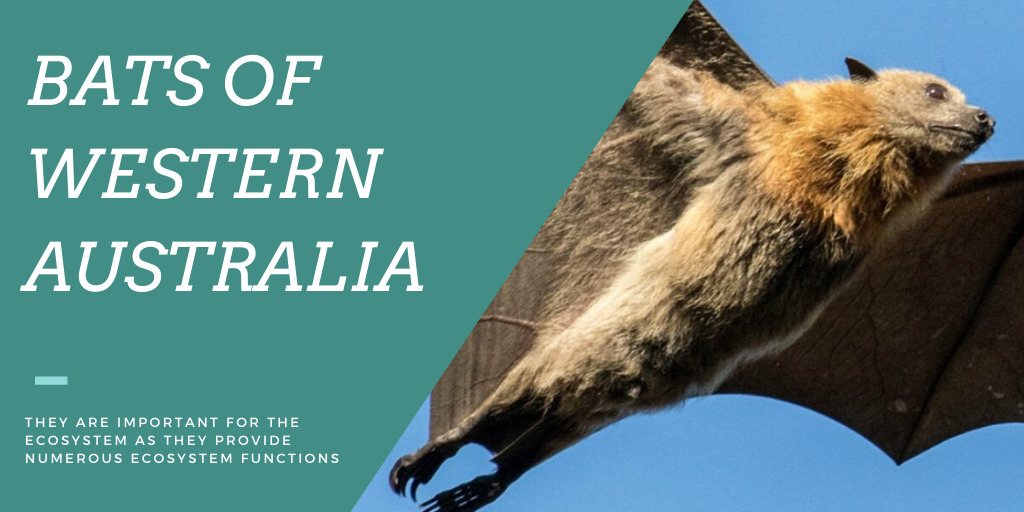 Bats are so unique in nature that a particular category was created for them in the order of mammals, called “Chiropterans”, which means “winged hands”. Bats constitute around 20% of all mammals in the world (Treehugger 2019), and they are the only ones capable of real and sustained flight. Scientists divide bats into two sub orders due to their size, the Mega bats, for example, Flying Foxes (Pteropus poliocephalus) and the Micro-bats such as Gould’s Wattled Bats (Chalinolobus gouldii).

You may or may not have noticed that in Western Australia bats are found in most of the areas of the state, however, widespread habitat loss and fragmentation has led to an increase in urban and rural bat populations. Bats are important for the ecosystem as they provide numerous ecosystem, such as pollinating trees, spreading seeds and consuming millions of insects every night.

Bats are vital for the maintenance of biodiversity, they pollinate through flower to flower contact and the dispersal of seeds through their guano (bat poo). The majority of bats are herbivores, which feed on vegetables and seeds. Some bats are Nectarivores meaning they prefer flower nectar and pollen as their main food source. The insectivores eat, you guessed it, insects, while the majority of bats from around the world eat fruit, making them frugivorous.

It is worth noting that among the thousands of bat species, only three are hematophagous, meaning they feed on the blood of birds and small rodents. They are the “common vampire bat” Desmodus rotundus, the “white-winged vampire bat” Diaemus youngi, and the “hairy-legged vampire bat” Diphylla ecaudata. It is these bats that have probably caused a bad reputation for the species, possibly being one of the reasons for bats being a threatened species.

That some bats make “low-flying flights”, this may feel like a threat but there are two very good reasons for this. The first is that “fruit bats” fly above and below the plants they intend to feed on, the second reason is that these animals fly towards objects to locate them on their radar (echolocation) and see if it represents a threat, this includes humans and animals. Instinctively bats hide when an “intruder” appears in their natural environment.

Unfortunately, many types of bat are now under threat, with 15.8% of species classified as endangered or extinct (Coleman, K. 2018). In addition to the persecution driven by fear and ignorance, other factors have decreased the number of bats such as, habitat destruction, fire, pesticides, feral animals and disturbance at caves. In Northern WA, for example, goannas and python may be partial to a bat or owls and other raptors that may try to prey on a flying fox. In the urban environment, such as Perth, it is more likely ravens that will try to snatch a newborn. Urban environment predators, the cat and dogs.

Although bats are under threat, there are vast and diverse bat communities in Western Australia. The state supports a total of 37 species from seven families, two of which are endemic to Western Australia (Armstrong 2018).

The most common type of Bat in WA is the microbat, specially the Gould’s Wattled Bat, which is highly adaptable, found over most of Australia and uses a variety of roosting sites including tree hollows. The Whitestriped Freetail Bat is endemic to southwest WA and is one of the few bats whose echolocation calls are audible to the human ear. The least common in the Perth area is the fast-flying Western False Pipistrelle, which is also endemic to southwest WA (Friends of Forrestdale 2013).

According to the Department of Health Western Australia (healthywa.wa.gov.au), Bats can carry on some disease and risk. Similar to other wildlife, bats can carry bacteria and viruses, including the Australian Bat Lyssavirus (ABLV), Hendra virus, Histoplasmosis, Leptospirosis and Salmonella. There have been very few documented cases bats to human infections transfer. The risk of infection can be managed by limiting direct handling and making sure you wear puncture-proof gloves, long sleeves and protective glasses if ever having to handle bats. The best way to avoid any contact with bats is by using protective equipment, clothes and tools, so you do not need to touch the animal directly.

Bats can come across as intimidating or scary even. However, these little flying mammals are such unique, misunderstood creatures that play a vital role in biodiversity. The best thing you can do to help the bats populations are:

Bat Conservation International. 2015. Green news from the UC Division of Agriculture and Natural Resources Bats in the belfry? No, bats in walnut orchards. 04 15. Accessed 06 20, 2020. https://ucanr.edu/blogs/blogcore/postdetail.cfm?postnum=17395.