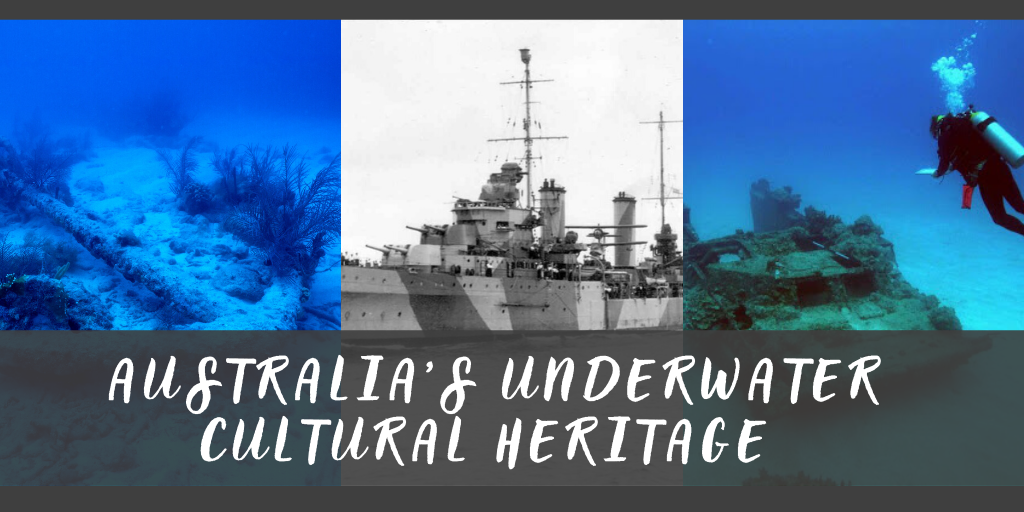 When you think about cultural heritage, the first thing that may come to mind is artefacts lost in sand and time or places with a past life, where people walked and gathered hundreds maybe thousands of years ago. What you may not know is that cultural heritage extends past the shorelines and into depths of the water.

Under both the UCH Act and the Convention, underwater heritage is defined as “all traces of human existence having a cultural, historical or archaeological character which is located either partially or totally underwater, for a defined period of time” (Commonwealth of Australia 2018), (UNESCO 2001).

As far back as 1956, UNESCO’s Recommendation on International Principles Applicable to Archaeological Excavations applied to underwater sites situated inside territorial waters. However, the protection of this heritage wherever it might be, i.e. also in international waters, still called for a specific and wider-reaching international legal instrument (UNESCO 2010).

In 1997 the UNESCO General Conference decided that the protection of the underwater cultural heritage should be regulated global and passed an international convention. Between 1997 and 2001, the Draft convention was formed (UNESCO 2010).

On the 5th of July 2010, the Commonwealth, States and Territories of Australia came together to discuss how to meet international best practice management of Australia’s underwater cultural heritage, as outlined in the Convention (Commonwealth of Australia 2010). The outcome of this intergovernmental agreement was an agreement to cooperate nationally to manage Australia’s underwater cultural heritage and the acknowledgement of the Commonwealth, states and territories of their roles and responsibilities.

The UCH Act is applied in conjunction with the associated Underwater Cultural Heritage (Consequential and Transitional Provisions) Act 2018. This new legislation continues much of the successful policy framework established under the Historic Shipwrecks Act and implements the recommendations from the public review of the Historic Shipwrecks Act 1976 (Department of Environment 2019), which was held in June 2016. The UCH Act draft to align with current international best practice standards and management as defined in the Convention (Commonwealth of Australia 2018a). The UCH Act has several unique elements derived from the Convention, such as:

Western Australia is home to about 8,000 known historic shipwrecks, sunken aircraft and other underwater cultural heritage sites and around 500,000 relics in Australian waters (Commonwealth of Australia 2018a).

In both the Convention and the UCH Act, material and wrecks of Australian defence vessels and aircraft are protected by sovereign immunity excluding any of these that were captured or surrendered to a foreign country before they sank or if they have been relinquished by the Commonwealth (Commonwealth of Australia 2018a).

Wrecks not protected by sovereign immunity can still be protected outside of Australian waters if they have been declared to be protected under the UCH Act by the Minister in consultation of the Government of its nearest coastal state (Commonwealth of Australia 2018a). A limitation of the UCH Act is that it only allows enforceable for offences committed by Australian citizens, corporation and vessels on a UCH declared wrecks.  Damage caused by non-Australian citizens/corporation or damage to undeclared wrecks is not covered.

The UCH Act came in to force in 2018, enabling the cooperative implementation of the national and international maritime heritage responsibilities, its enactment is a step closer to Australia’s possible ratification to the Convention (Beatty Legal 2019).

Ratification of the UNESCO Convention would allow Australia to protected underwater cultural heritage, in the zone between the 24 nautical miles and our 200 nautical mile Economic Zone (EEZ), from unauthorised actions by foreign persons or vessels. Ratification would also enable Australia to participate in the global community’s response to illegal salvaging, looting and trafficking of underwater cultural heritage and give Australia a greater say in the day to day protection of our heritage outside of Australian waters (Department of Agriculture, Water and Environment 2019).

Here at Integrate Sustainability, we understand that heritage issues can be complex, if you or your company need any guidance or assistance, please get in contact with us on 08 9468 0338 or email enquiries@integratesustainability.com.au

UNESCO. 2010. The History of the 2001 Convention on the Protection of the Underwater Cultural Heritage. UNESCO.