The rare Gilbert’s Potoroo, its expensive taste and conservation efforts 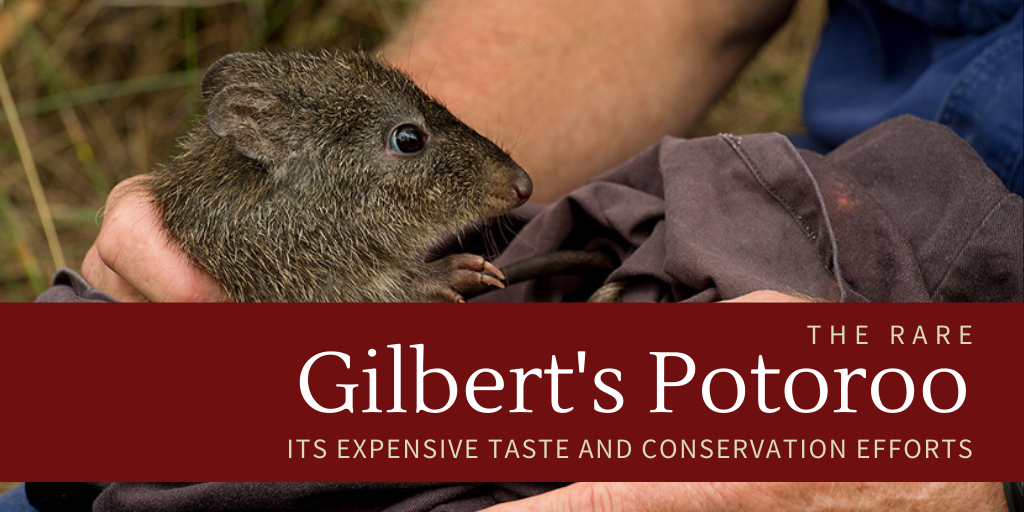 The world’s rarest marsupial has expensive taste and was once considered extinct for a century. The Gilbert’s Potoroo (Potorous gilbertii) is a small elusive rat-kangaroo (Potoroidae) that was named after the English naturalist John Gilbert, who was the first to obtain specimens of the species from King Georges Sound (South-West Australia) (Friend 2007). The ground-dwelling nocturnal creature lives beneath dense bushes and shrubs, and rarely crosses large open areas making it hard to spot even when they are only found wild in a small area near Albany (Atlas of Living Australia 2020).

Potoroos hop around on their long hindfeet and use their strong forefeet, which have long curved claws, to forage and dig. The species resemble quendas, which are also found in their habitat, with dense soft grey-brown fur, lightly furred tail and round ears (Gilbert’s Potoroo Action Group 2016).

Gilbert’s Potoroos live in small colonies (approximately 3-8 individuals). In the wild, they can live to over seven years old and will breed at any time of the year (Department of Biodiversity, Conservation and Attractions WA 2020). Female potoroos can only carry one young at a time in their pouch, however, the species is also known to exhibit embryonic diapause. This means that a second embryo can be held in a state of diapause and will not develop until the first young has left the pouch (Atlas of Living Australia 2020). Young will stay within their maternal home range for 7-18 months before moving to another colony.

The Gilbert’s potoroo was once thought to inhabit a range of areas in Australia’s south-west from Albany to Margaret River. However, by the early 1990s, the species was considered to be extinct. It was not until a survey for quokkas was conducted in 1994, that the potoroo was rediscovered in Two Peoples Bay Nature Reserve near Albany (Department of Biodiversity, Conservation and Attractions WA 2020). Following its rediscovery, a number of specialised surveys were conducted between Bremer Bay and Margaret River in the hope of discovering other populations of the Gilbert’s Potoroo. Unfortunately, outside of Two Peoples Bay, no other populations have been found (Friend 2007).

Gilbert’s Potoroo is now recognised as a critically endangered species under both the WA Bioversity Conservation Act 2016 and Environment Protection and Biodiversity Conservation Act 1999. It is estimated that there are less than 40 mature individuals remain in their natural range (International Union for Conservation of Nature and Natural Resources 2019). As a result of the lack of knowledge about the Gilbert’s Potoroo’s habitat & diet preferences, the impacts of genetic diversity and other behavioural matters it is too difficult to develop and implement effective conservation management strategies and breeding programs (Department of Biodiversity, Conservation and Attractions WA 2020).

A number of threats to the survival of the Gilbert’s Potoroo species have been identified including:

Recovery actions for the Gilbert’s Potoroo have been outlined in a recovery plan, and a recovery team led by the Department of Biodiversity, Conservation and Attractions was established in 1995 to support conservation efforts (Department of Biodiversity, Conservation and Attractions WA 2020). A not-for-profit community group, the Gilbert’s Potoroo Action Group, has also been established to share information about the species and support conservation efforts.

Not long after its rediscovery in Two Peoples Bay a number of Gilbert’s Potoroos were captured to establish a captive colony in the effort to promote breeding. However, the success of the captive colony only lasted a couple of years.

Captive colonies are no longer kept; however, the facilities used for the original breeding program are still in place for translocation and emergency purposes. Keeping the potoroos in captivity has proven unsustainable because of the difficulty associated with providing a diet of ground truffles for captive individuals which appears to be important for their health and breeding success (Arnall 2015). Instead, translocation efforts have been made to study the Gilbert’s Potoroo dietary preferences in new environments and whether future translocations could be successful.

A breeding colony has been established within a 380ha pest-free enclosure at Waychinicup National Park, home to a number of other threatened mammals. Unfortunately, while the enclosure keeps out feral cats and foxes, native carpet pythons have been found to be attracted to the area and are preying on the small mammals. While exposure to predation is important to prevent the species from becoming complacent, scientists are monitoring the predation issue in the enclosure and relocating some of the pythons if they were found to have eaten a potoroo (Arnall 2015).

Since 2005, a few potoroos have been translocated to Bald island in the effort to establish a breeding colony that is free from predation (Atlas of Living Australia 2020). In 2016, another island off the coast of Cape Arid National Park, Middle Island, was chosen to establish another colony (Gilbert’s Potoroo Action Group 2019).