Environmental Matters for 2019 – The Year in Review 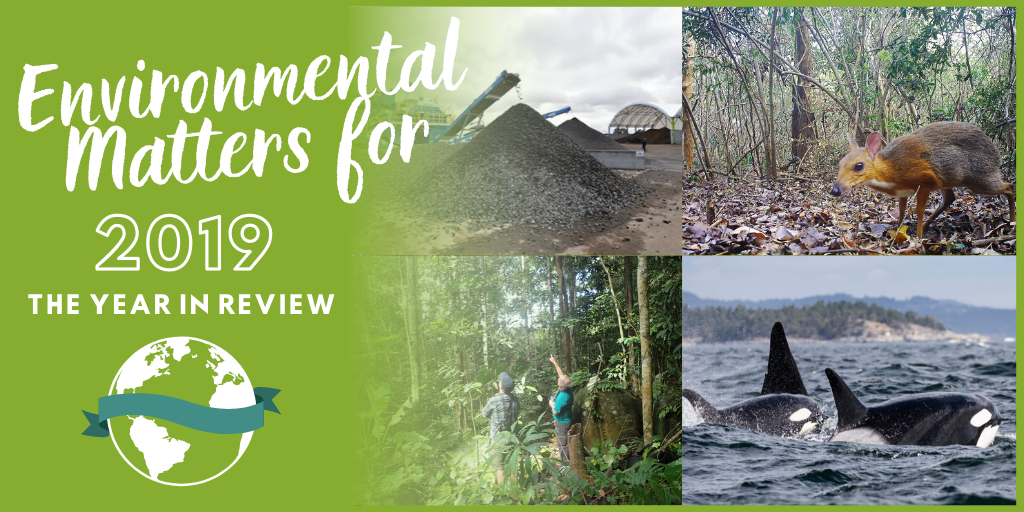 Our Earth and the environment had been one of the most talked-about topics of 2019 with much of the environmental impacts being the focus of these discussions. Early last year, thousands of fires burned over 7,200 square miles of the Brazilian Amazon rainforest, home to 10% of all known plant and animal species around the world (Borunda 2019) (Timson 2019). The increasing frequency of exceptional tides resulted in the second-highest Acqua Alta (high water) recorded in history, flooding the city of Venice in November of 2019 (Berry 2019). By the end of the year, we have seen bushfires spread across our own country, as the bushfire risks have intensified all over Australia due to long drought, dry fuels and soils, and extreme heat (Climate Council 2019). With a lot of negative news surrounding the climate changes, biodiversity impacts and pollution, we must not forget the positive achievements made across the world or the wonderful scientific discoveries that occurred in 2019.

2019 was a year of great discoveries in the natural world as two species listed on Global Wildlife Conservation’s list of top 25 most wanted lost species have been rediscovered, providing a big hope for the conservation of biodiversity all around the world.

The World’s Biggest Bee that was once thought to be extinct has been found alive in the lowland rainforests of North Moluccas, Indonesia. Wallace’s giant bee (Megachile pluto), four times the size of a honeybee, gets its name from its original discoverer, Alfred Russel Wallace. Wallace collected the bee while exploring Indonesia’s North Moluccas islands in 1858; the last sighting was made by the entomologist Adam Messer in 1981. 38 years later, nature photographer, Clay Bolt, and entomologist, Eli Wyman formed a search party that embarked for Indonesia in January. After going missing for nearly four decades, the species has now been rediscovered in its native Indonesia (Buehler 2019).

The Southern Institute of Ecology and the Leibniz Institute for Zoo and Wildlife Research have also rediscovered a wildlife species. The silver-backed chevrotain (Tragulus versicolor) is a deer-like species the size of a rabbit with a silver sheen. Also called the Vietnamese mouse-deer, the species was last recorded more than 25 years ago and is the first mammal rediscovered on Global Wildlife Conservation’s list of top 25 most wanted lost species. The first-ever comprehensive survey on the species is being carried out to develop and implement a conservation action plan. A team of scientists are working to determine the size, distribution and stability of the population, and to understanding the threats to its survival (Global Wildlife Conservation 2019). The conservation action plan aims to strengthen enforcement and protection of the species across its range, building on the increased enforcement already put in place at the site of rediscovery.

The last two Northern White Rhinos (Ceratotherium simum cottoni) left worldwide, Fatu and Najin, are both female and living at the Ol Pejeta Conservancy in Kenya (Karimi and Feleke 2019). In 2018 the last male, Sudan, died raising fears of extinction for the subspecies (Karimi and Feleke 2019). After successfully harvesting 10 eggs from Najin and Fatu, the international consortium of scientists and conservationists announced in August that 7 of the eggs had been artificially fertilised through ICSI (Intra Cytoplasm Sperm Injection) (Karimi and Feleke 2019). The eggs were extracted from Fatu and Najin and fertilised with frozen sperm from two different northern white rhino bulls, Suni and Saut, both deceased. In early September, Ol Pejeta Conservancy announced two viable embryos are being stored in liquid nitrogen, waiting to be transferred into a surrogate mother in the near future. Since neither Fatu or Najin can carry a pregnancy, international scientists have created the two embryos to later be transferred to the Southern White Rhino surrogate mothers (Ceratotherium simum). A milestone in assisted reproduction for the Northern White Rhino population has returned hopes of saving the endangered animals and may be a pivotal turning point in the fate of these magnificent animals (Dockrill 2019).

The Environmental Protection Act 1986 (EP Act) was introduced to Western Australia over 30 years ago. It has been an effective framework for protecting the environment and ensuring that the impacts of significant proposals are assessed and managed (Government of Western Australia 2019). Western Australia is home to some of the world’s most biologically diverse flora and fauna as well as some of the world’s most significant natural resources (Department of Water and Environmental Regulation 2019). It is for this reason that the McGowan Government has expressed the importance of finding a balance between delivering the full economic potential of our resources while protecting human health and the environment. In October, a discussion paper was released on ‘Modernising the Environmental Protection Act’, with the intent to promote conversation around some of the proposed amendments (Government of Western Australia 2019). Some of the key changes proposed include (Department of Water and Environmental Regulation 2019):

These amendments address a number of issues raised by many reviews made since 2006 and aim to promote best practice on environmental protection and sustainable development (Government of Western Australia 2019).

Over in New Zealand, parliament has passed a landmark legislation that protects the country’s commitment to the Paris Agreement and establishes New Zealand as one of the few countries in the world with a legislated commitment to meeting the goals of the Paris Agreement. The bill sets a trajectory for reducing emissions and introduces a range of complementary measures, including the establishment of an independent Climate Change Commission to recommend guidance to the NZ government on reducing emissions and adapting to the impacts of climate change, as well as determining emissions budgets. The New Zealand bill will see the country achieve zero net carbon dioxide emissions by 2050 by committing to establishing policies consistent with limiting global warming to just 1.5°C (Mazengarb 2019).

There has been increasing concern in Australia and around the world about plastic pollution in our oceans. On 9 August 2019, the Council of Australian Governments (COAG) agreed to establish a timetable to ban the export of waste plastic, paper, glass and tyres in Australia. The agreement reflects the need to ensure that exports of waste do not cause harm to human health and the environment while building Australia’s capacity to generate high value recycled commodities and associated demand (Australian Government 2019). Commonwealth, state and territory governments have agreed that these waste materials that have not been processed into value-added materials should be progressively banned from export from Australia by no later than 30 June 2022, starting from 2020 (Department of Environment and Energy 2019).

On June 10, Canada’s House of Commons passed Bill S-203, or the Ending the Captivity of Whales and Dolphins Act. With this bill, Canada has made it illegal to catch and hold whales, dolphins and porpoises in captivity, banning the practice of keeping cetaceans in captivity in the country. The new legislation also prohibits the trade, breeding and collecting of reproductive materials from the animals, such as sperm or embryos. The only exceptions to these provisions will be in cases of rescues and rehabilitation, licensed scientific research, or in the “best interests of the cetacean’s welfare”. The bill also makes it illegal to participate in the competition, exhibition, or any other events in which captive whales or dolphins are used for performance for entertainment purposes. Those who violate sections of this law can be fined up to $200,000 (Mongabay 2019).

Other Positive Facts of 2019

A lot of change has come about in the past year to help increase the protection of biodiversity and minimise environmental impacts. Read about some other positive news of 2019;

In Rome, citizens can get €0.05 off the price of their Metro Fare for every bottle they recycle (Broom 2019).

The Western South Atlantic Humpback Whale population has come back from the brink of extinction. Thanks to conservation efforts, they’ve gone from a few hundred to 25,000 (Rech 2019).

Sea turtles are making a huge comeback, with their populations increasing by 980%, thanks to the Endangered Species Act (Kiger 2019).

Peru has committed to ending Palm oil-driven deforestation by 2021. A “momentous win” for wildlife and sustainable agriculture (Webber 2019).

Should you or your business have any questions regarding the protection of biodiversity or require any assistance with minimising environmental impacts, please contact Integrate Sustainability on 08 9468 0338 or enquiries@integratesustainability.com.au.

Borunda, Alejandra. 2019. See how much of the Amazon is burning, how it compares to other years. August 29. Accessed December 12, 2019. https://www.nationalgeographic.com/environment/2019/08/amazon-fires-cause-deforestation-graphic-map/.

Rech, Dominic. 2019. After being pushed close to extinction, this humpback whale population is making a comeback. October 17. Accessed December 17, 2019. https://edition.cnn.com/2019/10/17/world/humpback-whale-recovery-intl-scli-scn/index.html.