Red-tailed Phascogale – How Cute Am I 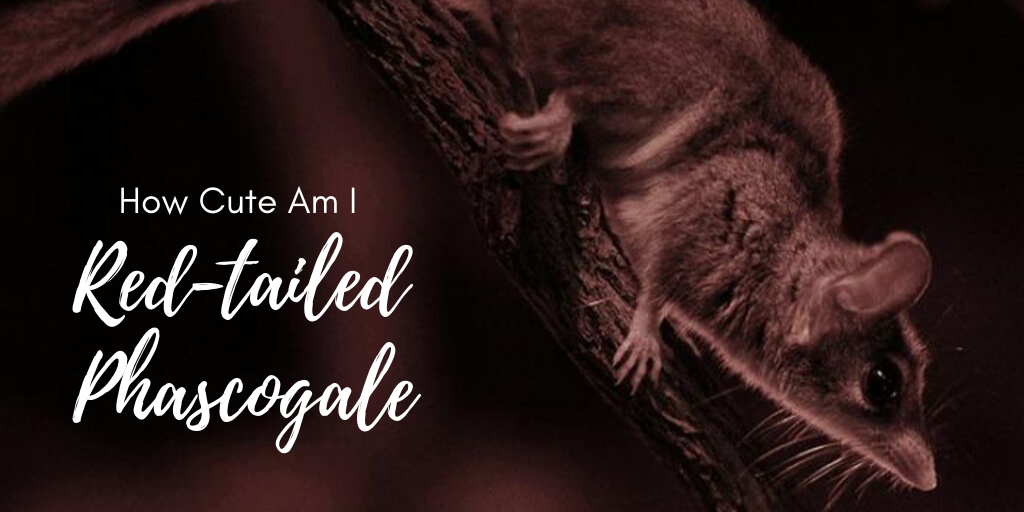 The Red-tailed Phascogale is a small, ashy grey coloured insectivorous marsupial with a distinctive reddish-brown tail. Their scientific name is Phascogale calura, and they are also known as Red-tailed Wambenger and Kenngoor (Indigenous – Nyoongar) (Zoo 2019). Like most other phascogales they are nocturnal, semi-arboreal animals that generally move to the ground to feed on a wide range of insects and spiders.  They rarely drink water as they typically obtain enough moisture from there food (Australian Wildlife Conservancy 2019). This species has an interesting life, with most males dying after the winter mating period. As such, males only live for 11.5 months, while females can live up to 36 months and produce 2-3 litters of young during their life (Australian Wildlife Conservancy 2019).

The Red-tailed Phascogale is striking, highlighted by a tail that grows up to 14.5 cm in length, beginning with a reddish-brown tone at the base and ending in a brush of long black hair. Another highlight is its large, thin, reddish ears. This species is highly sexually dimorphic (Foster 2006) with males growing to 12.2 cm long and weighing up to 68 grams, and females growing to 10.5 cm and weighing 48 grams (Bradley 2008). In the mating period (in July), males travel large distances to mate with as many females as possible. During this period, the males’ immune system fails before they reach 12 months of age, and they die due to stress. The females continue the season to carry her young and breed a second or third time – she can live as long as 3 years (DEC 2009). This species can have up to 13 joeys in a litter, however typically a maximum of 8 survive, because a female only has 8 nipples. They normally prefer to make their nests in the hollow limbs of Eucalyptus Wandoo.

Interesting Fact – The Red-tailed Phascogale is an excellent climber and can jump up to 2m.

Interesting Fact – Predation by feral cats is considered the primary cause of the decline of Red-tailed Phascogales.

Historically, the species had a wide distribution in arid and semi-arid Australia. However, part of the population has been lost from WA, with the decline commencing in the mid-1970s with the clearing of native vegetation. This species’ range has contracted to the south-west of WA and is restricted to remnant patches of bushland in the Wheatbelt Region (Australia 2019).

Interesting Fact – Much of the Phascogale’s original habitat has been cleared for agriculture, and much of the remaining bushland is highly fragmented and is declining in condition.

The Red-tailed Phascogale is largely confined to woodlands with old-growth hollow-producing eucalypts, particularly Wandoo (Eucalyptus wandoo) and York gum (Eucalyptus loxophleba). It is often found in areas with associated Rock Sheoak (Allocasuarina huegeliana), but has also been recorded in shrublands and various mosaics of woodland, shrubland and scrub-heath. It avoids relatively open areas and rocky ridges which are devoid of vegetation, and prefers long unburnt patches (more than 50 years between fires) (DEC 2009).

The Threatened Species Scientific Committee has a number of management plans that are relevant to the species including:

Interesting Fact – You also can help protect wildlife by phoning the Wildcare Helpline if you have found injured wildlife on (08) 9474 9055.

Also, you can download the Wildcare Helpline App, from the links below. They offer advice on sick, injured, or displaced native wildlife and refer callers to a wider network of experts for assistance. For more information; https://www.dpaw.wa.gov.au/about-us/contact-us/wildcare-helpline.

If you or your company require assistance to identify Threatened and Priority fauna species which may potentially occur in your site or need an Environmental Assessment Report, please give Integrate Sustainability a call 08 9468 0338 or email enquiries@integratesustainability.com.au.