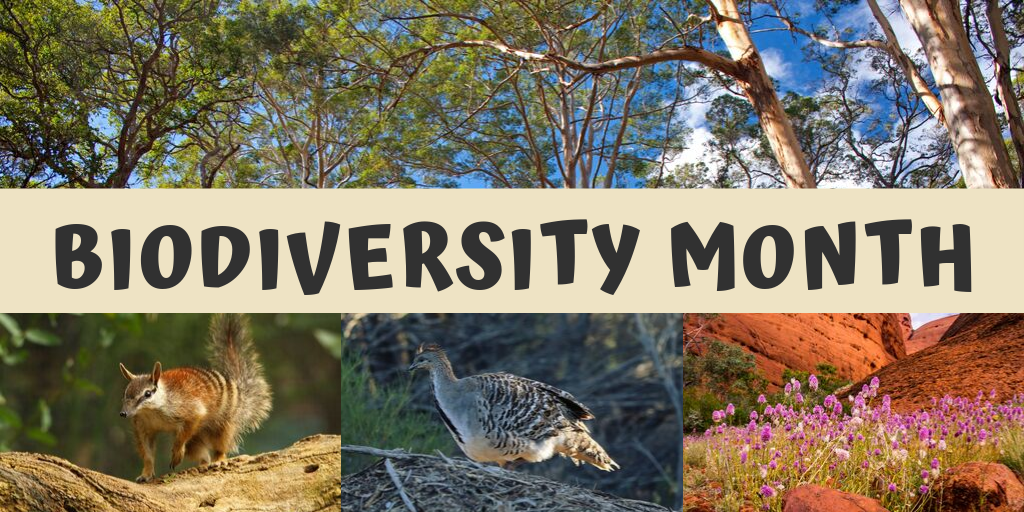 September is the National Biodiversity Month. Every year biodiversity month is held to help promote the importance of protecting, conserving and improving biodiversity.

What are some of the threats to biodiversity?

Unfortunately, there are a significant number of threats to Australia’s biodiversity, such as habitat destruction, introduced species, poor fire management and climate change.  Unfortunately, most of these threats are associated with activities by humans.

Humans have extensively modified the earth in the pursuit of urban development, natural resources and land for agriculture (Hostetter, 2005). In Australia, it has been estimated that approximately 44% of our forests and woodlands have been cleared (Commonwealth of Australia, 2016). Land clearing causes the loss and fragmentation of natural vegetation, leads to the degradation of soil and land, which can reduce and isolates species populations (Commonwealth of Australia, 2008).

Another major cause of biodiversity decline is climate change. Climate change is changing the environment and how species interact with their ecosystem. Human activities such as land clearing and fossil fuel burning have resulted in increased generation of greenhouse gases, which has raising the Earth temperature.  Rising temperatures are greatly affecting the survival of species within ice/snowy biomes, where the temperature is a critical component of the environment (Hostetter, 2005). In Australia, our northern wetlands and the Great Barrier Reef are some of the most vulnerable communities threatened by climate change though reduce rainfall and increasing ocean temperature (Commonwealth of Australia, 2008).

How can we protect biodiversity?

We can protect biodiversity by preserving habitats and ecosystems (Australian Museum, 2018). We can assist in protecting Australia’s natural biodiversity by:

Australia is one of the world’s biggest biodiversity hotspots. Most of our plant and mammal species and nearly half of our bird and marine species are endemic (Department of the Environment and Energy, 2019). In Australia there is a wide range of programmes protecting biodiversity values:

The Australian Government has developed a Biodiversity Conservation Strategy to act as the guiding framework for the conservation of national biodiversity. The aim is to engage all governments, businesses and the communities in directing efforts towards achieving healthy, resilient biodiversity and sustainable living (Department of the Environment and Energy, 2019).

The strategy was revised after the first five years of its implementation to improve its ability to drive change and to align with international biodiversity commitments. The three key goals of the revised strategy are: to connect all Australians with nature, care for nature in all its diversity, and build and share knowledge (Biodiversity Working Group, 2017). You can read the draft revised version “Australia’s Strategy for Nature 2018-30” here.

CSIRO’s research helps us understand our national biodiversity values so that we can improve our environmental management measures  (CSIRO, 2019) . Some of the biodiversity projects that CSIRO is involved in include:

The future of biodiversity

There are several opportunities currently emerging that can help us protect and preserve biodiversity in Australia. Improvements in technology for biodiversity monitoring and management (Commonwealth of Australia, 2016) and increasing social engagement in biodiversity efforts can potentially halt the loss of biodiversity.

The development of new technologies, including drones and image recognition algorithms, has made it easier to collect and study environmental data (Guerrini, 2015). Improved dataset storage capacities and data presentations have also made it easier and more cost-effective to analyse biologic data (Commonwealth of Australia, 2016). Scientists can use this data to identify biodiversity hotspots, track species at risk and understand how ecosystems operate so that we can implement improved environmental management strategies.

Society is becoming increasingly educated and involved with sustainable efforts. People are more aware of the effect climate change has on biodiversity and are now implementing small sustainable changes to their lifestyles. Citizen science projects, where anyone can use a smartphone app to record sightings of a species, are becoming more popular. These projects are increasing public engagement and education on biodiversity while helping scientists gather data on threatened species (Jake Snaddon, 2013). Other activities like beach clean-up events and voluntary site restorations are small but important steps towards protecting our local ecosystems.

Why not spend some time this biodiversity month learning about Australia’s biodiversity? There are many local organisations around protecting our biodiversity and native species or promoting sustainability, that will appreciate your support. If society, governments and industry all contribute to the implementation of sustainable practices, we may be able to reduce the loss of biodiversity we are currently experiencing.

Should you or your business have any questions regarding the protection of biodiversity or require any assistance with minimising environmental impacts, please contact Integrate Sustainability on 08 9468 0338 or enquiries@integratesustainability.com.au.

Commonwealth of Australia. (2008). Chapter 5 – Threats to Australian Biodiversity. Retrieved from Department of the Environment and Energy: https://www.environment.gov.au/system/files/resources/e9f0d376-78eb-45cc-9359-797c6b0f72ff/files/chapter5.pdf