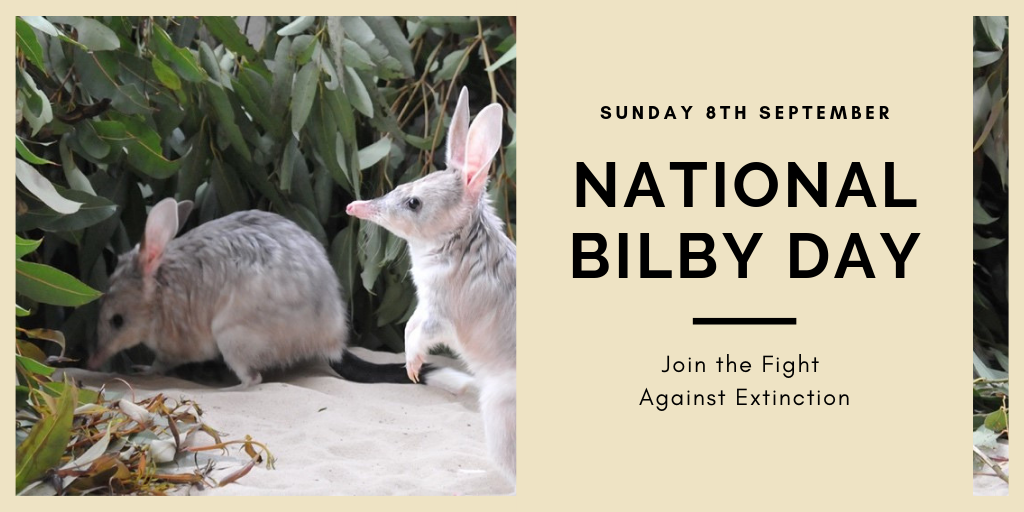 Each year Australia celebrates National Bilby Day on the second Sunday of September. Bilbies are a significant part of Aboriginal culture featuring in traditional songs and stories of Indigenous Australians (Pavey 2006). For 60,000 years, bilbies inhabited more than 70% of mainland Australia across a range of habitats, co-existing with the Aboriginal people (Bush Heritage Australia, 2019). Within 200 years of European settlement, Australia has seen the Lesser Bilby (Macrotis leucura) become extinct and the range of the Greater Bilby (Macrotis lagotis) reduce dramatically throughout Australia. The Greater Bilby is now facing the threat of extinction, only occurring in fragmented populations across arid and semi-arid regions of Australia (Save the Bilby Fund, 2017). The key purposed of National Bilby day is to help spread awareness and raise funds for the conservation of a nationally vulnerable species, the Greater Bilby.

Bilbies are a member of the bandicoot family but differ in a number of ways. They are often referred to as the rabbit-eared bandicoot or pinkie for their long pinkish rabbit-like ears. Their fur is silky blue-grey with a black and white tail. The Greater Bilby grows up to 55cm in body length, about the size of a rabbit, with a tail length up to 29cm (Department of the Environment and Energy, 2019). This nocturnal marsupial is the only bandicoot known to burrow (Bush Heritage Australia, 2019). Bilbies have adapted to have strong forelimbs and long claws that allow them to dig burrows in which they take shelter during the day. Using their long tongue and pointed snout they dig out fruit, tubers, insects, and fungi to eat.

Introduced species play a major role in the decline of the Greater Bilby, through predation, competition and causing habitat destruction. Bilbies are preyed on by the European red fox, feral cats and wild dogs, whilst introduced herbivores such as rabbits compete with bilbies for food and shelter (Bradley, et al. 2015). Feral camels and cattle graze on vegetation contributing to the destruction of Bilby habitats (Pavey 2006). Other pressures on the Bilby habitats include mining and other developments, the Tanami, Pilbara and Great Sandy Desert (Pavey 2006). Distribution and colonisation of the Greater Bilby into new areas can be affected by wildfires.  Fire removes vegetation important for reproduction and why also removing vegetation increasing the Bilby exposed to predation (Bradley, et al. 2015).

The Great Bilby is a protected species throughout Australia. In their fight against extinction, the National Recovery Plan for the Greater Bilby (2006) is being revised to build on conservation actions that protect and manage bilby populations and habitats. The current Recovery Plan aims to reduce the impact of predation, reintroduce populations into their former habitat and preserve genetic diversity through controlled captive breeding programs and maintaining remnant populations in number and size (Pavey, 2006). Recovery actions include ongoing research into the threatening processes and monitoring abundance and occurrence trends (Pavey, 2006).

The National Bilby Day encourages the spread of awareness and community involvement with local council efforts to conserve this unique species.

In Western Australia, the Martu people the traditional owners of 136,000 square kilometres in the Pilbara Region have been working to preserve and protect all native animals and their habitat. For example the Martu ranger program has been using their traditional knowledge on the mankarr (greater bilby) to help undertake baseline survey and to monitor the species number in the traditional lands (Skroblin, Carboon and Martu 2017). The reinstatement of traditional fire patterns, ensures that small patchy burns occur allowing some vegetation areas to remain (Skroblin, Carboon and Martu 2017).

How you can help?

The survival of bilbies relies on the support of the community and you can help by becoming involved;

In the spirit of National Bilby Day, help spread awareness about the vulnerability of the Greater Bilby and get others on board to join the fight against extinction.

I acknowledge, honour and respect Aboriginal and Torres Strait Islander people and the Ancestral Spirits of the land and waters on which I live and work.