Biodiversity Corridors – The role that they play in a fragmented landscape 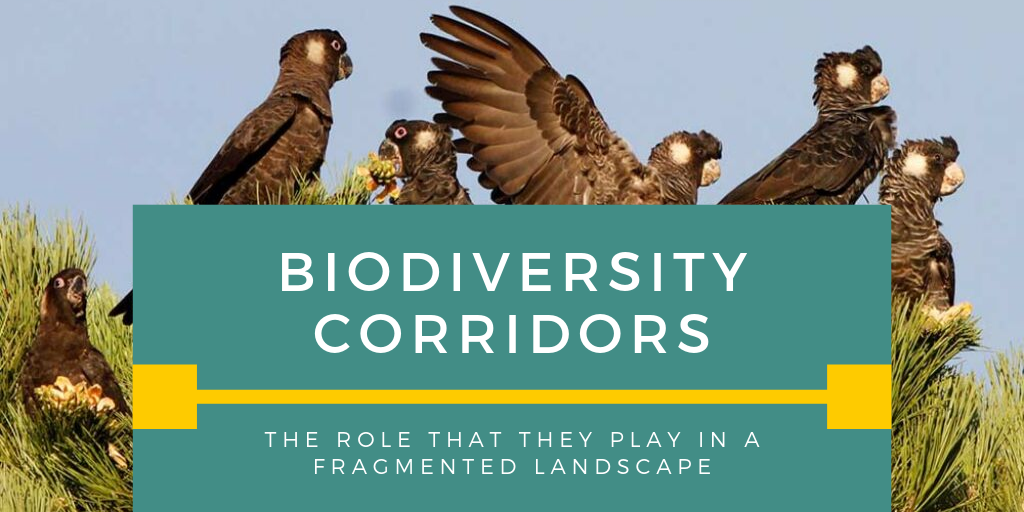 The term ‘Biodiversity Corridor’ is used to describe areas of vegetation which allow animals to travel from one patch of bush to another (ForestrySA, 2003). Biodiversity corridors can be both natural or man-made and can function at either a local or regional scale. Around the globe, including regions in Western Australia, the landscapes have been extensively cleared, resulting in what is known as a fragmented landscape. Fragmentation results in patches becoming isolated from one another, and this affects their ability to function and support species correctly. Wildlife corridors, connectivity zones and ecological linkages are all ways that the isolation of these patches can be reduced, increasing species utilisation and habitat values.

Corridors are an ideal way to facilitate movement for species across a fragmented landscape. There are several types of corridors which can be used to create connectivity, and each these have their own characteristics and benefits.

The term ‘corridor’ has been used for a number of years to describe the connections formed by vegetation across a landscape. Traditionally wildlife corridors have been established as linear tracts of vegetation between two or more larger patches of vegetation (EPRD, 2004).  These wildlife corridors are often established along man-made infrastructure, such as fence lines or roadways, or often surrounding landforms which cannot be removed such as waterways (Marcot, Raphael, Schumaker, & Galleher, 2012).  A key issue with wildlife corridors in the traditional sense is that they are often quite narrow, as the areas they are established in locations that don’t allow for a large area to be created or retained. This results in wildlife corridors lacking in ecological function when compared with larger patches, and they are often frequented by predators. As a result of this, corridors are only suitable for some species, and many animals avoid using the corridors all together (Davis, 2015).

Connectivity zones are similar to wildlife corridors, but rather than being a singular row or vegetation type, as would be seen along a fence line or roadside, connectivity zones form a broader connection between patches, incorporating a multiple row or species approach (USDA, n.d.). By having a broader connection, some of the issues which can arise with a wildlife corridor can be reduced and ecological processes can be better maintained.

Ecological linkages also act similarly to wildlife corridors and connectivity zones but are often much wider and non-linear. They can be defined as ‘a series of continuous or non-continuous patches’ which are close enough to each other to facilitate the movement of species across a landscape (Molloy, Wood, Hall, Walldrodt, & Whisson, 2009). Where the previous two are mostly manufactured, ecological linkages aim to utilise a variety of pre-existing patches within a landscape (Marcot, Raphael, Schumaker, & Galleher, 2012). Thus, rather than being a connection between two patches, an ecological linkage acts as a network of native vegetation areas which maintains ecological functions, therefore countering the effects of habitat fragmentation (Guthrie, 2010). As they are typically not manufactured, Ecological linkages are designed to be used as a tool to recognise the ecological value of patches within close proximity, and integrating each as a ‘stepping stone’ in the ecological zones (Molloy, Wood, Hall, Walldrodt, & Whisson, 2009).

How do they work

Movement between patches is often vital for the survival of both flora and fauna species. This is because many ecological processes and functions often break down when a patch is isolated, resulting in the degradation of the ecosystem of the patch (Marcot, Raphael, Schumaker, & Galleher, 2012). By facilitating the movement of different species across a landscape, each patch can receive the necessary processes that it requires in order to function correctly and thus maintain an adequate level of ecosystem health.

Patches can function at both a local and regional level. Local connectivity would involve a series of nature reserves within a suburb or council area which are connected by Wildlife Corridors or Connectivity Zones so that animals can traverse between the two without having to interact with the urban or cleared landscape outside of this.

At a regional scale, Ecological Linkages are most appropriate. One such example of an Ecological Linkage is the Gondwana Link in the south-west of Western Australia. Although the vegetation may not be continuous for the entire length of the linkage, planning and implementation allowed for a multitude of patches to be incorporated into the mosaic of connectivity, meaning that more patches benefit from the linkage.

The Benefits of Ecological Linkages

There are a range of benefits that come from the retention or creation of ecological linkages across a landscape. Molloy et al., (2009) outlines the benefits that include:

Whilst all types of Biological Corridors can be effective when implemented correctly, the key difference between Wildlife Corridors, Connectivity Zones and Ecological Linkages is not only the size and area which they can cover but also the number of patches which can be incorporated and whether they are natural or manufactured. Where possible, it should be endeavoured to maintain natural linkages across landscapes; however if this is not possible, Connectivity Zones should be used in favour of Wildlife Corridors in order to provide the best habitat for species to access.

Should you or your business require assistance in retaining biological corridors or the assessment of the ecological linkages associated with your area please give Integrate Sustainability a call 08 9468 0338 or email enquiries@integratesustainability.com.au.

Davis, D. A. (2015). Scientific criteria and guidelines for Ecological Linkages. Perth: The University of Western Australia.