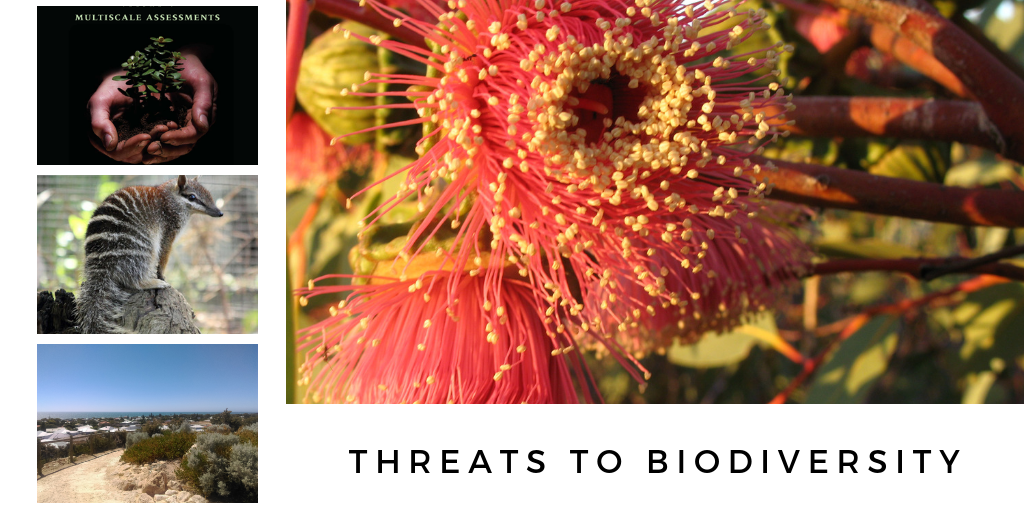 The importance of Biodiversity

Australia is renowned for its unique ecosystems, and evolutionary distinct flora and fauna. With countless biodiversity hotspots, Australia is one of the world’s 17 megadiverse countries, which account for 70% of the world’s biological diversity across less than 10% of the Earth’s surface (Commonwealth of Australia, 2018). 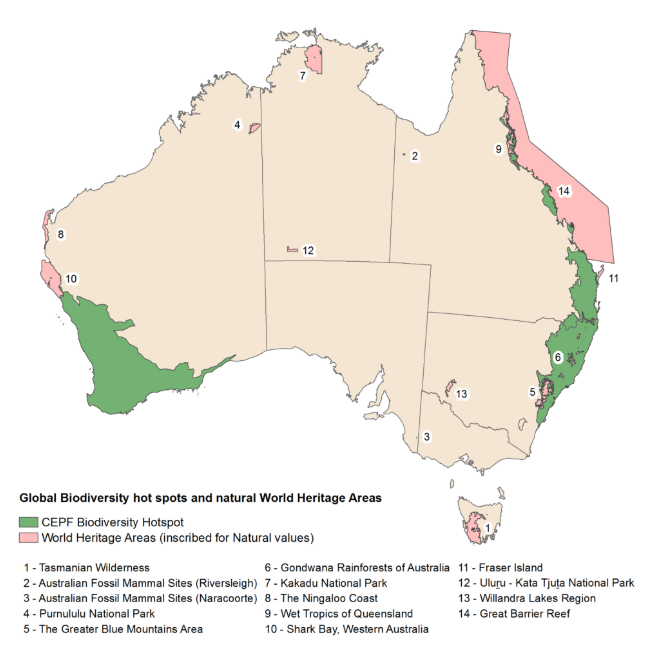 Source: Australia State of the Environment

It is fair to say that most people consider biodiversity to have its own intrinsic value. However, we should also recognise that biodiversity holds great importance to humans. The Commonwealth Scientific and Industrial Research Organisation (CSIRO) biodiversity book describes five values that humans place on biodiversity; economic, ecological, cultural, scientific and recreational (CSIRO, 2015). Biodiversity provides humans with the raw materials that we use, that supply us with oxygen and the pollination of plants, as well as tourism and recreational activities, such as bird-watching and fishing, to name a few.  By respecting the values and benefits that we gain from Australia’s natural diversity, we can improve the way we manage and protect our biodiversity, and our wellbeing.

Between 2001 and 2005, a global effort brought together more than 1,360 experts to study the links between human well-being and biodiversity, with respect to environmental changes (MA, 2005). The key objective of the Millennium Ecosystem Assessment (MA) was to provide a scientific basis for the actions we need to take to improve our conservation efforts, and sustainable use of, the Earth’s natural resources. 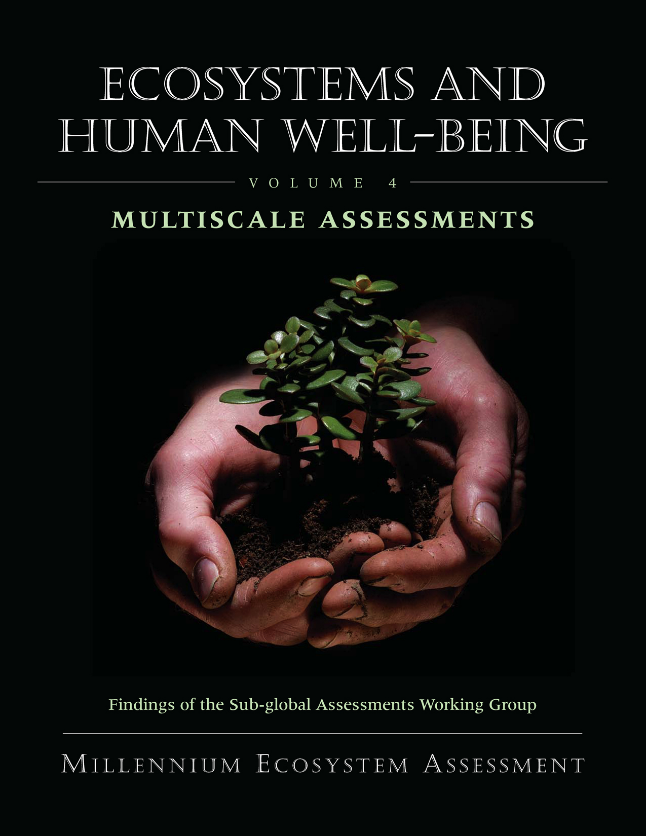 This advanced study of the earth’s ecosystems, and the services they provide, has shown the world that over the last 50 years, humans have changed the environment more extensively that any other period of time in human history. This has been largely due to the boom in our global population, which has meant a rapid increase in our demands for food, fresh water and construction materials. The result of these whirlwind changes has led to a significant loss to the diversity of life on Earth, that is mostly irreversible. This is detrimental to our wellbeing, as it subsequently limits the supply of such services as fresh water and oxygen.

The MA also identified a number of ‘emergent’ findings from their assessment. Over 60% of the 24 ecosystem services examined, were found to be progressively degrading (MA, 2005). The experts also identified that dryland ecosystems were under the most pressure. Dryland areas are seeing the most rapid growth in human populations, whilst being the least productive for food and building materials (MA, 2005). This places significant pressures on these areas to provide the resources we require for basic human survival. It was also observed that ecosystems under pressure experienced problems with an increase in diseases, decreased water quality, the collapse of fisheries and coastal dead zones.

The MA findings provide an important contribution to decision-making, regarding the management and conservation of our national biodiversity.

Scientists are continuously working to measure and record the full extent of all life on Earth; with our increased knowledge it has been estimated that around nine million species are now threatened (Convention on Biological Diversity, 2018). This is largely due to the pressures placed on the earth by our use of its natural resources.

The greatest pressures that are currently placed on global biodiversity include:

When several of these factors are combined, species can become threatened, or even disappear completely from an area. The fragmentation of habitats, which are predominantly caused by human interaction, weakens population number and allows invasive species to spread. This can result in temporary impacts to the health of a population, such as disease, to completely wipe out the species of a given area.

There are also species that require stable climate conditions to reproduce. The effects of climate change can interfere with natural processes that species require to maintain healthy populations.

Actions We Can Take to Protect Biodiversity

Whilst we are not actively trying to harm biodiversity, many of our routine activities can have unintended consequences for our local flora and fauna. There are countless conservation initiatives that focus on protecting biodiversity hot spot across the world, which provide great opportunities to support conservation. However, there are also many small actions that we can take to support biodiversity in our own backyards. The Unfolding Earth (2018) identifies just a few of the commitments we can make to support local biodiversity values: 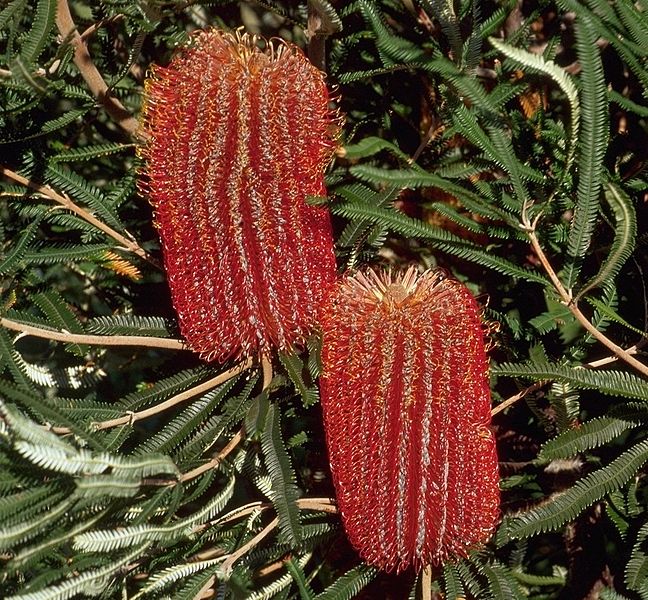 Scientists are still trying to effectively measure the Earth’s biodiversity and the extent of its loss. However, by each taking small steps in our local community, we are providing a great assistance to the global conservation effort.

Should you or your company require assistance to minimise environmental impacts, or should you want assistance with designing a biodiversity conservation plan, please contact Integrate Sustainability at enquiries@integratesustainability.com.au or (08) 9468 0338.

Commonwealth of Australia. (2018), Importance of Biodiversity, Retrieved from https://soe.environment.gov.au/theme/biodiversity/topic/2016/importance-biodiversity

The Unfolding Earth. (2018), Things You Can Do to Protect Biodiversity, Retrieved from http://theunfoldingearth.com/10-things-you-can-do-to-protect-biodiversity/