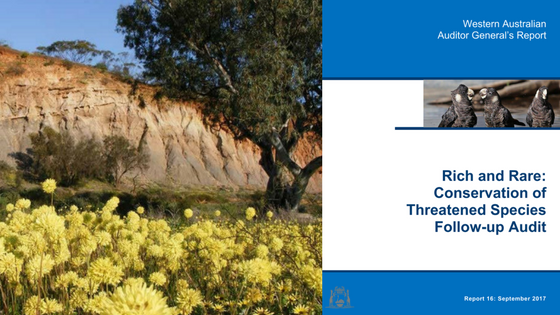 The Auditor General recognises that the size of WA and the high level of biodiversity makes conserving threatened species challenging.  He also noted that constrained resources, coupled with a growing task list, means prioritising conservation activities to ensure effective use of resources is becoming increasingly important.

WA has a huge challenge when it comes to protecting our biodiversity, we have 8 of Australia’s 15 biodiversity hotspots in the state.  In fact, our South West region is one of 36 internationally recognised biodiversity hotspots – and is one of only a few that are in developed countries.  The Department currently manages around 29 million hectares of national parks, marine parks and other reserves.

This report, 8 years on, has key findings that can be grouped into three main themes:

The scale of the task facing the Department has increased in the past 8 years. The number of species added to the threatened list has grown by 12% and the number of species now considered possibly threatened has increased by 29% since 2009.  WA is the only state which maintains a register of what they call ‘priority species’.  This means a species may be threatened but more knowledge is required before it is listed as a threatened species.  Conservation activities for priority species may help to ensure species or ecological communities are not listed as threatened.

Increased knowledge about the State’s diversity has increased the listed threatened and priority species register.  This is also adding to the scale of the Department’s task in managing the conservation of threatened species and they are doing this with fewer resources.  The report recognised that both expenditure and staffing levels were below those that existed in 2009.  So, the Department is trying to do more with less, making the need to prioritise conservation activities for maximum effect increasingly important.

The Department’s response to the Auditor General’s report is that they recognise they have a large, growing and complex task ahead of them, however, they feel they have been effective over the past eight years, with the resources and funding made available to them.

A major milestone for the Department occurred September 2016, with the new Biodiversity Conservation Act 2016 (BC Act) being passed.  The BC Act replaces the very outdated Wildlife Conservation Act 1950 (WC Act), providing the Department with a legal framework that is in line with modern conservation practices for the protection and management of threatened species.  The BC Act is being implemented incrementally and the Department expects to have all relevant regulations, processes and procedures required to fully enact the legislation in place by next year.

In line with this new approach, it was found that 55% of all threatened species and ecological communities now had recovery plans or interim recovery plans in place (as at January 2017).  In addition, 91% of critically endangered species and ecological communities also have recovery, or interim recovery plans in place.  However, it was found that despite plans being in place, they are not always activated.  This is mainly due to the fact that plans are often not funded when they are developed and there is no automatic or systematic process to ensure funding is allocated when plans are created.

Another recommendation made in 2009 was for the Department to improve their approach to reserving land for conservation purposes.  The Department did not perform well in this regard.  The Auditor General found that there was minimal documentation on planning, objectives, identification of reservation targets and processes and procedures – pointing to little progress since 2009.  In 2016, the Department managed 29 million hectares of land and water – which was an increase of 2 million hectares from 2007-2008.

The Auditor General did acknowledge that while the Department is able to purchase private land, or identify other land for conservation reserves, the process is not entirely within the control of the Department.  While, the Department is able to initiate the process for reserving land for conservation, the process also relies on the support of other WA government departments and Ministers for the land to be reserved.  The report identified at least 23 instances since 2012 where support was not received and no land was reserved.

The Auditor General found that the Department still has work to do in addressing the 2009 recommendations made around reporting, knowledge management and prioritising conservation efforts.

One 2009 recommendation was to develop a comprehensive reporting framework for the Department, and while there was some robust reporting for some programs, there was still no Department wide coordinated approach to reporting.  It found there was no approach to evaluation of outcomes, little to no output reporting and minimal reporting to senior management on threatened species.  The report acknowledged that the Department is large, and regionally decentralised and managing conservation of threatened species presents complex issues.  However, it also found that to do this effectively, the Department needs to know outcomes and reporting on results will increase visibility and accountability for senior management.

There were many recommendations in 2009 about the Department making better use of the information it collects and has at its disposal for the management of threatened species.  The report found that Department’s decentralised management structures resulted in large amounts of information being held in multiple locations and separate systems – decreasing efficiencies, particularly where systems were locally managed.

The Department has recognised there is a need for a more centralised approach information and knowledge management and plans to implement new processes and systems by June 2018.  They do also comment in their response, that they consider their people to have access to all relevant information needed to make decisions within the current system. The Department has scoped the development of a more centralised data system, which will be implemented in stages as priorities and resources allow.

Another 2009 recommendation suggested the Department make changes to its prioritisation process to ensure resources were used to maximum effect.  Despite acknowledging that it is often difficult to allocate priorities to elements of complex biological systems, the Auditor General was critical of the Department in this area.  He stated that he expected to find a management approved structured approach to prioritisation to have been documented but there was no evidence of this.  He found there was no clear articulation, or documentation, of the processes surrounding prioritising conservation activities.  This was despite the Department having several levels of administrative, conservation and organisational policies and strategies in place which identify key principles for regions to plan for conservation activities, including the need to prioritise actions appropriately.

In their response to the report, the Department does acknowledge that they can make improvements to their reporting framework and are working towards this end. However, the Department does note that it feels the current reporting regime is not limiting in any way, it’s effectiveness in managing the conservation of threatened species.   They also comment that they feel their recently developed corporate framework and associated policies, provide sufficient guidance on prioritisation of activities across a range of scales.